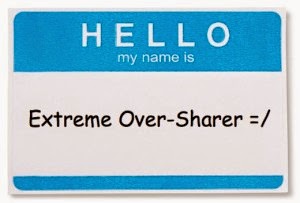 I am back from asking complete strangers with which political party they identify most strongly. So far nobody has said, "I most strongly identify with the Social Kingship of Christ the King." That would be awesome. Of course in Scotland such a person would probably turn out to be a Covenanter who never got around to dying.

It is Seraphic Single Saturday, and I have had a request to talk about oversharing about men and dates. Thus this post should make a nice companion piece to yesterday's post, which was about talking to men. Today's post is about talking to women about men, especially the ones who most interest you.

If you enjoy talking about your friends to other friends, you can bet that at least some of your friends enjoy talking about you. And, despite what juicy things my friends might be sharing about me,  I would be the first person to say that this is not all bad. It might even be good. Generally I talk about only people I care about and/or think are very interesting. Meanwhile I strive not to say anything critical about someone unless I have been terribly hurt or shocked, in which case I may start doing the tango along the border of righteous anger (virtue) and detraction (vice).

But I am not telling you this to encourage you in your gossip, but to remind you that others are gossiping about you, and the only way to control what gets said about you is to be prudent in your words and actions.

Unless you are naturally taciturn, the more you like a man, the more you are likely to talk about him. Dwelling on the subject of him will give you so much pleasure, you will not notice the growing boredom of those around you, especially if they have never met him. A few details are okay, and I think a woman in a new relationship should be able to talk about the chap for the length of time it takes to drink a cup of coffee, but that should be that.

Incidentally, if you complain for hours to all your girlfriends about how the guy you are dating is pressuring you for sex, and you suddenly stop complaining about him but don't break up with him either, everyone will assume you have given in. Sorry, but come on. Pick one and only one, preferably the most loyal or silent, of your female friends to confide in about your sex-and-chastity woes, swear her to the most abject secrecy and do not breathe a word of all this outside the confessional, therapist's room or doctor's office. Oh, and I think you should break up with him, too.

But to return to the gentler world of Cath Soc, the Newman and the Trad Mass society, you really must be careful what you say about anyone in a group of 200 or fewer people, for in such a small environment, what you say will very likely get back to him, and not necessarily in the form it left your ruby lips. You really, really, really should not share personal stuff anyone tells you about their past, their family, and their deepest, darkest secrets to anyone else. And this includes the stuff men tell you on dates. Smart men don't marry women they can't trust, and if you can't be trusted, no smart man is going to marry you. Thus, whatever you tell your friends about men, keep it positive and rational.

Don't say: Ugh! I never want to see Scooter again. He bored me senseless about skeet-shooting.
Say instead: Scooter is very much into outdoor sports. I think he'd enjoy meeting girls who are too.

Don't say: Skip is so fantastic, I want to marry him right now and have his babies!!!
Say instead: I really enjoyed my date with Skip. He's a great guy with a good sense of humour. I hope he calls again.

Don't say: I always thought Sully a tough guy, but it turns out it's just a front he developed 'cause his father beat him black and blue and his brothers made fun of his interest in art!
Say instead: I really enjoyed my date with Sully. He's a deep character. He knows a lot about life, and he has a real interest in art.

Believe me, I know how crazy and impossible this sounds. But I promise that it gets easier with practice and with age. The older you get, the more you understand that people are not really interested in positive stuff, like how utterly fantastic Skip is, but glom onto negative stuff, like what a pain in the butt Scooter is. But nevertheless if you tell people positive stuff about other people, they begin to think  that you are a positive person. And if you constantly tell them negative (if interesting) stuff about other people, they may start feeling negatively about you.

So what can you do? You have so much to tell, but you are not sure if you should tell it.  I recommend my old friends the pen and paper. Get a little girl's diary with a lock, if you can find one--there are computerized versions now (!)--and write all about your dates to your hearts' content. You could also begin a computer file although I don't recommend a blog. No matter how anonymous you are, and how anonymous you make your dates, if you go public, someone will find out who you are. One of my brothers once realized that the girl he was on a date with was the author of a dating blog he enjoyed reading. Can you imagine? Well, I suppose you can if you were ever mentioned on "Seraphic Singles."

Alternatively you could pay your therapist, who is bound to professional silence, to listen to you enthuse or emote for an hour. Or you could visit your housebound grandmother or aunt, if you have one, and tell her all about it. Or maybe you could even visit a sympathetic older married female friend with grown-up children or no children at all, preferably one who is not in your immediate social circle. Older married women have their own romantic life sorted out and settled, and so take more of an impersonal interest in other people's romances than Single women within the same dating pool. They can listen and enjoy without feeling the impulse to tell someone else except, perhaps, their husbands.

Incidentally, anything negative a married friend tells you about her husband, short of violence, you must never repeat to anyone else. Never. Not even to your own husband. He doesn't want to hear it anyway. Husbands don't like the idea of wives discussing them with other men's wives. Meanwhile, don't tell married women stuff you don't mind their husbands knowing, just in case they don't share my philosophy. However, do not panic about this too much, as husbands tend to forget random news snippets offered to them by their wives.

How to put up with other people's oversharing is a delicate issue. It horrifies me to know that some married people actually violate the sanctity of their marriage bed by discussing what goes on there with their work colleagues. Less culpably, perhaps, since they are after all just "partners" (at best) or whoremongers (at worst), "partners" and whoremongers sometimes do that too. You are well within your rights to say "TMI" to such people and cover your ears in a jokey way the first time, and then to inform them more seriously that you are not comfortable hearing sex talk at work the next time, and then to have a little meeting with your manager or HR officer on the subject the time after that. I believe making people hear about one's sexual exploits (or lack thereof) is a form of sexual harassment.

In social life, there are no managers or HR, so just say "TMI" and cover your ears. After you do this five times, Chatty Cathy or Chuckle Charlie will get it. If s/he doesn't, s/he isn't really your friend is s/he?