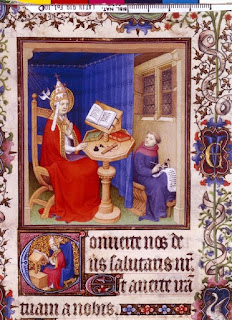 "I sincerely want to say Thank you so very much for your Mad trad corner in our Prairie Messenger!  It is refreshing for an 82 yr. old Nun to hear (see) those wonderful devotions which fed my spirit when I was young!  And you have such a delightful way of expressing your joy in these actions, words and prayers.  How can anyone find fault with you for remembering and reminding us of our roots?  God bless and reward you for your writing.  Do keep it coming!  I was actually disappointed that our latest edition of P.M. did not carry your Mad Trad Corner.  It's the first item I look for."

-- from a Prairie Messenger reader

It is Traddy Tuesday, the day I set aside for discussing traditional Catholic liturgy and devotions. I do this for would-be converts who read about Catholicism in books written before 1963, and then rush off to the nearest parish church where their hopes are dashes and their minds confused.

I was born after the Second Vatican Council, and the more I read novels by Catholics, the more I wondered at the unfamiliar devotions. Portrait of the Artist as a Young Man really blew my mind. "Tower of Ivory---wahhhh?" When I was 19 I asked my history teacher how the Church had been different before the Second Vatican Council, and he admitted he didn't know. The recently-obtained full funding for Ontario's Catholic high schools had meant an end to Catholic-only faculty.

Here in the UK there has been some squabbling over the recent funeral of a celebrity named Cilla Black. She came to fame as a pop singer in the 1960s.  More recently she was  known for being a "television presenter", a very British institution. British show-biz celebrities "present" many reality-based TV programs and  compete on various quiz shows, and you can see them several times in one night of television watching. They are not always singers and actors: some are art historians like Andrew Dixon Wright or journalists like Ian Hislop. If presenters are around long enough, they are deemed "national treasures." Such a national treasure was Priscilla Maria Veronica Black.

She died suddenly, aged 72, of a stroke, and her funeral was held in Liverpool's Roman Catholic Cathedral. It was a star-studded affair with a eulogy by a comedian,  a devotional pop song by Sir Cliff Richard, and the Beatles' "The Long and Winding Road" for the recessional. The missalette provided for the black-clad mourners declared the service to be "A Celebration of the Life of".  It was televised and live-blogged on the Daily Telegraph. A good time was had by all--except, presumably, Priscilla Black. May she rest in peace, and may perpetual light shine upon her.

As Mrs Black is held in high esteem by the populace, catechised Catholic tooth-grinding over her three-ring funeral shocked many cultural Catholics, who read the complaints as slights against the deceased, and say things like "No wonder so many people have left the Church!" I imagine many more will threaten to do so if Liverpool's priests try to explain why they may not have eulogies or "The Long and Winding Road" at their loved ones' funerals.

If I were the archbishop of Liverpool, surveying the wreckage left by Cardinal Warlock, I would throw in the towel and offer all comers their choice of Pop Celebration of Life (with limits, e.g. no "My Way") or Roman Catholic Funeral. Pop Celebration of Life would carry a hefty price tag ("rental of venue"), and Roman Catholic Funeral merely the organist's fee.  Sic transit gloria ecclesiae scouserensis.

But without any further ado, here is my Mad Trad piece on Gregorian Chant. As I wrote to my editor, "it thoroughly approves of Vatican II and complains that the will of the Council does not seem to have as yet prevailed, [and so] absolutely everybody should love it."


The teaching of Vatican II concerning church music has not been tried and found wanting; it has been found difficult and left untried.
No, I take that back. There are a few places where Sacrosanctam Consilium is respected; St. Michael’s Cathedral in Toronto is one of them, or certainly was when I was a child and my brothers attended its Choir School. “The treasure of sacred music is to be preserved and fostered with very great care,” says Sacrosanctam Consilium, and St. Michael’s Choir School has done that since 1937.
The document continues, “The Church acknowledges Gregorian chant as proper to the Roman liturgy; therefore, other things being equal, it should be given pride of place in liturgical services.”   Gregorian chant was, in fact, given pride of place in liturgical services at St. Michael’s Cathedral, and may be still today. But it is a sad fact that, despite the directions of Vatican II, Gregorian chant has become limited to cathedrals, monasteries, a handful of parishes and bestselling CDs.
Now that I am married to a member of a church choir devoted to plainchant and traditional polyphony, I can laugh at the very great contrast between the splendid music provided by St. Michael’s Choir School and the ragbag of folk tunes, pop songs and borrowings from the Protestant hymn tradition that characterized the parish churches of my youth. Never again will I wilt before the screeches of a cantor robbed of her Broadway dreams nor the bellows of a tenor under the impression that he is Pavarotti at the Met. I am free, free at last, from the tyranny of guitars, drums, clapping and the St. Louis Jesuits. Safe in the embrace of the Extraordinary Form of the Mass, I can worship with the music prized by the Second Vatican Council.
“In the Latin church,” that Council decreed “the pipe organ is to be held in high esteem, for it is the traditional musical instrument, and one that adds a wonderful splendour to the Church’s ceremonies and powerfully lefts up man’s mind to God and to heavenly things.” Other instruments may be admitted but “only on condition that the instruments are suitable for sacred use…that they accord with the dignity of the temple, and truly contribute to the edification of the faithful.” I don’t know about you, but I am edified every single Sunday.
The Catholic musical tradition did not begin and end with Dan L. Schutte’s 1972 “Sing a New Song” and other worn-out warbles from Glory & Praise. From the earliest times, Christians have sung in worship although scholars have only the sketchiest idea of what our earliest music sounded like. The origins of plainchant, or what we usually now call Gregorian chant, are mysterious; its traditions were passed along orally until the ninth century, when musical notation first reappears. The anonymous Benedictine author of The Beginner’s Book of Chant (2003) recalls that “Catholic tradition maintains a degree of Divine intervention: the picture of a dove whispering into the ear of Pope Gregory the Great (c. 540-604) may be closer to the truth than many skeptics would allow.”
The genius of chant is that it is perfectly suited to communities, which is no doubt why monastic communities have sung it for so long. Monophonic and originally unaccompanied, it can be taught easily to unskilled singers. It renders their voices, joined together in unison, rich and powerful. Dignified and humble, Gregorian chant can be sung beautifully by young and old, bass or soprano. It discourages soloists; in Gregorian chant no-one is supposed to stand out from the others. It needs leadership but no cantor.
Gregorian chant developed through the centuries and was joined by liturgical polyphony, a tradition more suited to skilled choirs than to the entire community and therefore occasionally suppressed. Nevertheless, many composers, like Palestrina and Victoria, used polyphony to write beautiful liturgically appropriate music. Today Catholic composers like Rory Lucas and James Macmillan continue to write liturgical music within the traditional polyphonic idiom, and on days when your cantor has left you particularly depressed, I suggest you find their works on youtube.com.


Sacrosanctam Consilium requested critical editions of the books of Gregorian chant current in 1963, and this was done. In addition to the large Graduale Romanum (Roman Gradual), a Graduale Simplex (Simple Gradual) was compiled for parish churches. Why these are so rarely used—flying in the face of the clear wishes of the Council—is a mystery to me. Fortunately, the recent craze in the secular world for Gregorian chant has touched off a renewal in Catholic circles. Slowly but surely the ancient beauty of our ancestral music is coming back to us.
***

Amazingly, I was not fired for this piece, which must have enraged almost every "minister of music" who read it. But I hope you enjoy the phrase "worn-out warbles"; it has given me a good snicker this morning. Goodness, the poor editor. It was well-written, but the high level of snark was just asking for trouble.

Update: Here, by the way, is the song that gave me the most consolation in a spiritually difficult time in my first year at my Toronto theology school. You may think I am joking, but no. It's not the entire song that did the trick, but the famous introduction. BOOM boom boom....


Nota Bene: This was never played during a college liturgy.


Update 2 (September 3): A very learned article on the same subject.  Caveat: it presupposes familiarity with the Extraordinary Form of the Mass.
Posted by Mrs McLean at 10:53