***Toronto Seraphic Singles! I have decided on a place to meet up tomorrow (V-Day) at 6 PM, and if you have emailed for info, I will email you shortly.**** 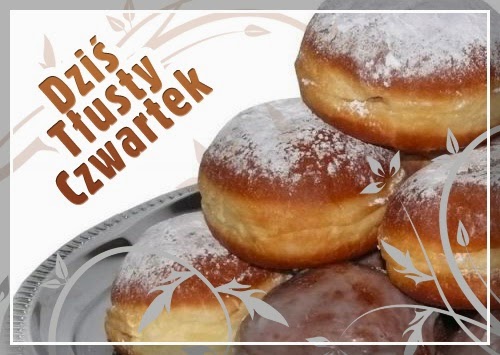 Yesterday was Tłusty Czwartek (Fat Thursday) in Poland and Polonia (i.e. everywhere else there are Poles), a sort of pre-Lenten doughnut eating blow-out. Possibly it marks the beginning of the Polish pre-Lenten carnival. The one thing I am sure about is the doughnuts, called pączki (PAUNCH-key), and the sheer necessity of eating them.

Toronto has two famously Polish neighbourhoods, the old one and the new one, and I was in the old one yesterday, so naturally I visited a Polish delicatessen to buy pączki for all my family. But alas!

"Skończyli się ('They're finished)!" announced the old lady with the counter, clearly enjoying the tragedy.

"Skończyło się (Our affair is over)?" I cried, reeling backwards.

"There aren't any?" asked my Lebanese friend, and we switched to English.

However, even though it was 20 degrees below zero, I carried on up the street determined to have my festive doughnut. At last I came to a bakery that had two left. As in the grocery store, the shop people were yelling at each other in Polish, which I understood a lot better this year, and I ordered my doughnut with a spritely, "Proszę pączek!" which apparently was wrong for Roncesvalles, for the man behind the counter found that somewhat amusing and told me in English it would be 65 cents. In light of day, Prrrrrrroszę o pączka! may have been more authentic. I will try that today.

As I had no time to call B.A. yesterday, I will give him and you all an idea of my Fat Thursday adventures.

Awoke at 9. Considered the following headline in the just delivered Toronto Catholic Register: "Maybe it's time to go traditional and have altar boys only".  Under this headline was a black-and-white photograph of my face.

"I'll be lynched!" I wailed. "Can I go to Trad Mass on Sunday instead of [parents' beloved parish]?"

Called a prison and arranged to see a friend imprisoned in it.

"I'd like to visit one of your residents," I said, thinking "resident" sounded super-polite and politically correct.

Took bus, subway train, and streetcar to Old Polish Neighbourhood to visit my pal  Lily and her new baby. Sat with the baby in the middle of jolly Growing Catholic Family chaos.

Walked as temperatures plummeted even  further down the snowy main street to Polish restaurant, the one B.A. knows. Met with Catholic bloggers and ate żurek and six pierogi with sour cream and pork fat. Waitress fooled into thinking I was Polish because żurek is on the menu as "white borscht" but I said żurek.

Subway to Runnymede to meet old pal Fishie who whisks me away to Oakville and a British pub that may look British but looks even more Oakville, which means Old White Money. There was golf, and golf alone, on three huge screens, amid etchings of Robbie Burns and old maps of Ireland. Still full of pierogi, I had French onion soup.

Back into car and away even farther into the wilds of Ontario to a meeting of parents' rights activists to hear Fishie give a talk about the new (if mysteriously hidden) Sex Ed*cation curriculum for Ontario.  Watched exciting footage of a handsome young MP demanding answers from wicked premier. Applauded vigorously as the handsome young MP appeared in person before us all.

Once more into the car and return to Toronto, only going to Little Italy for an 11 PM supper with political campaigners. Still full of French onion soup, I picked at the snazzy plate of antipasti and ordered an Irish Coffee. (I notice  vegetables were not a thing yesterday.)  I think it must have been 25 degrees below zero Celsius. (It is 22 below now.)

Home at a quarter to two in the morning. I thought, "Finally I'm over my jet lag!"

Woke up only five hours later, and said, "ARRRRGHHHH!"

Now I shall write another post on V-Day for those who need it. (See above.)
Posted by Mrs McLean at 14:02