Yesterday while searching for cute, I came across Holly Hobbie. When I was little, Holly Hobbie was all the rage. My parents were not sympathetic to buying things that were all the rage, but I did get Holly one Christmas, and great was my joy.

Holly is probably now living in the toy trunk under the train set. 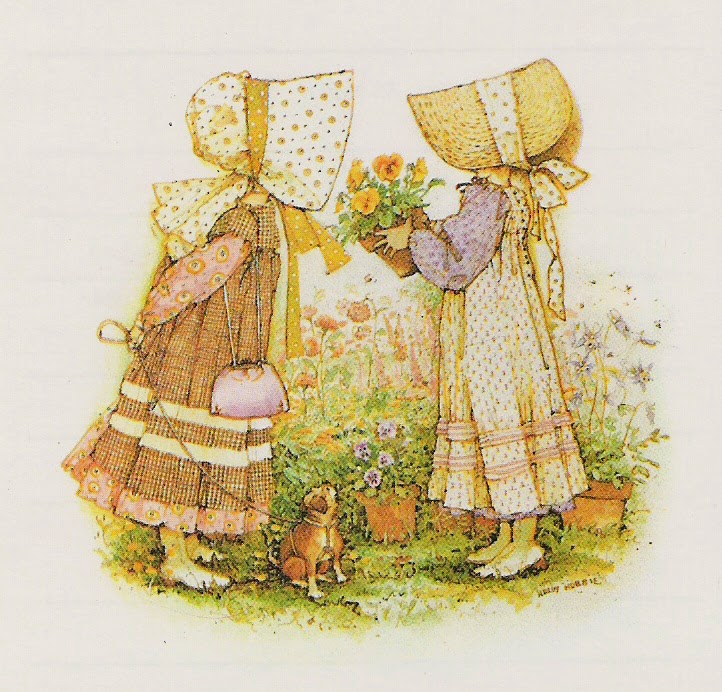 Only yesterday did I discover that Holly Hobbie is the name of the image's creator, not just the image itself.  And I am myself older than the doll, which blows my mind, as I thought she was from the Olden Days. Indeed, she meant the Olden Days to me, along with The Little House books.

The Olden Days, in case you are wondering, meant Canada's and America's pioneer days--the nineteenth century ones. The eighteenth century ones, once I heard about them, seemed too scary to me. The Legend of Sleepy Holly was Not Cute, nor was The Scarlet Letter, whose comic book form fell into my much-too-young hands. I associated the Olden Days with the countryside, flowers, small animals,  quiet, horses, nice bonnets. Little Women was also set in the Olden Days, though the March family seemed hectically urban next to Holly Hobbie and The Ingalls Family.

I would have been surprised to know that there was crime in the nineteenth century. My nineteenth century did not involve crime, war, injuries, rampant injuries or all that much death. It was a magical world of grandmothers who baked cookies, wore cameo lockets and lived in small cottages by the woods.

By 1978, I was so entranced with the Little House books that I thought the solution to the world's woes was to get rid of money and live by the barter system. I envisioned a return to agrarian society, and when I explained all this to a school visitor, I was sent to the once-a-week gifted program. I suppose my IQ scores must have played a role in the decision, but I have always thought it was my firm opinion that returning to the fields was the way to go that got me in

If civilization collapses, I will know I was right.  Meanwhile, I know perfectly well that the nineteenth century had horrors of its own. However, I am glad I didn't know that when I was very small.