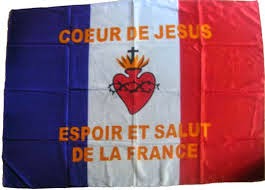 Before Mass yesterday, a troop of girls in foreign-to-me Girl Guide uniforms turned up and filed into the two front pews. Some of the girls were recognizable as members of our FSSP community. At first I thought they belonged to France--for one of the older girls had a very Catholic-looking French flag sewn to her blouse, but later I realized that, however unofficially, they belong to us.

This initiative has clearly been organized by the mothers of the girls, and I am in awe. In fact, I am reminded of the group of girls who showed up at the big Boy Scout rally at Crystal Palace and told the astonished Lord Baden Powell that they were the Girl Scouts. Now I have some inkling of how very brave the girls were to do that. And how clever Baden Powell was to ask his sister to take them in charge.

So now I can say there is something for girls in our community to do as "parishioners," thanks to the initiative of women much braver than I. And I hope this means that there will be a ceremony in which the girls crown a statue of Our Lady, for I have never seen that before.

And naturally this does not interfere in any way with the masculine nature of the sanctuary which, I firmly believe, fosters vocations to the priesthood.  It also suggests that the young mothers of the parish are so confident in the survival of the EF in Edinburgh, that they think it time to take the next step in developing the faith life of their children within the context of our community.

I must say I'm delighted--and a little envious!  However, it would seem I will never have daughters myself, so I will take some comfort in the sight of trad girls making their presence felt in a traditional female way.

Update: I myself did not go to Catholic Brownies and Guides but to the troop and company in the neighbourhood's Anglican Church, at it was nearest my home. In the 1970s and 1980s, there was nothing particularly scandalous in official non-Catholic Guiding. Indeed, I am glad that when girls took the sex novels out of their rucksacks at camp, in violation of their Guide Promise to be pure in thought, word and deed, it was not under the auspices of the Church.

Of course, the same cannot be said for the Guides today. Now sexual material is not something naughty and hilarious to be hidden away from the adults, but something to be terribly, terribly solemn and devout about in the name of "empowerment". I wonder what is worse for a young girl, Princess Daisy or the idea that being drugged to the eyeballs with contraceptive hormones makes you powerful. Hmm. I am sure the very question would make Lord Baden Powell fall down in a fit.
Posted by Mrs McLean at 10:26