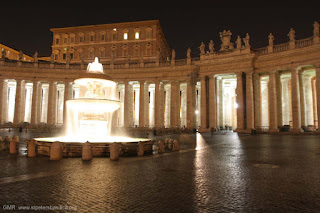 Yesterday was the Feast of the Immaculate Conception, which is an important Marian feast day, so I thought I should go to Mass. It was at 6:15 PM, so naturally it was very dark outside. (The sun set on Edinburgh at 3:39 PM.)  The well-lit wooden church was a beacon in the night. It was also nice to see extra candles around the statue of Our Lady.

December 8 also marked the beginning of the Year of Mercy. Our archbishop wrote a splendid pastoral letter about the Year of Mercy, encouraging the faithful to go to confession often this year, returning to the practice of frequent confession. It was not at all a license for license, as some people fear the Year of Mercy may be. It was very much a message to seek actively the mercy of God.

But both the Feast day and the inauguration of the Year of Mercy were overshadowed by some strange lights. St. Peter's Basilica was plunged into darkness and a show was projected onto it. I am of two minds about this.

First of all, worse things have happened to Christian churches. Any frank history of the Spanish Civil War will reveal unspeakable horrors. But even Christians have done awful things to Christian churches: sold them to developers, sold them for non-Christian worship, opened them to non-Christian worship, hosted profane concerts, hosted frankly indecent liturgical dances, destroyed their interiors, introduced new decorations expressing theological dodginess... A few gigantic photos of monkeys, lions and tigers projected onto the front seem pretty mild in comparison.

However, this was the front of St. Peter's Basilica, the most widely recognized Christian church on earth.

But then it could be argued that "the world is charged with the grandeur of God" and that the beauty of the creation reflects the beauty of God. Why not on the front of St. Peter's Basilica? Many old churches have ornate carvings of animals, ordinary people--and even demons!

However, among the images, I understand, were photos of overcrowded city centres, suggesting that you can have too much of a good thing when the good thing is people. There was also a photo of a woman, on her knees, in suffocating, servile bondage gear, e.g. a burka. Why? As part of a celebration of the world's cultures?* Part of contemporary British culture is binge drinking; I hope there was no photo of that.

But then it could be argued that these were not advertisements for Coca-Cola and Pizza-Pizza. The spectacle was far a good cause--helping to inspire delight in and care for the health of the planet we live on. It was, one almost imagines, the illustrated version of Laudato Si'.

However, one of the show's primary financial backers was the World Bank, which funds pro-abortion and contraception schemes in developing countries, acting under the belief that you can have too many people. (How well that belief worked out for China.) Also, the artist was not a Christian artist; the art was not Christian art.

St Peter's was built to give glory to God, not to give glory to creation. Like all churches, it thus has a certain dignity, but it can lose dignity, too. When I first walked into St Peter's--in 1998--I was impressed by its size but disappointed by its atmosphere. All around me tourists were talking and taking photos, and it felt as though the cameras had sucked the holiness right out of the building. I saw a tourist paddle his hand in a holy water font and flick the water at his giggling friend. It wasn't until I saw a team of paramedics hurrying to the aid of a woman who had fainted that I could feel Christ's presence in the building.

Since then I have become rather fond of St. Peter's and more tuned in to its holiness. Any ire has shifted from tourists who don't know better to security guards who should know better, e.g. the one who requested that I take my hat off before I approached the tomb of  then-Bl. John Paul 2 ("Ma sono una DONNA!" was answered only with a smug smile, shake of the head and a gesture indicating the removal of a hat. As far as I can tell, mantillas and headscarves still pass muster.)

After thinking out all the potential arguments, I am sorry that St. Peter's was used as a film screen and wish it hadn't been. Nobody goes into a cinema to look at a film screen, and rarely does anyone go into a cinema to worship God. St. Peter's is supposed to show the light of Christ to the world, not dim the steady light of Christ so that the flickering lights of the world may be seen more clearly.

The image of the film screen is very important to me, for I know that men and women often use each other as film screens on which to project their own fond imaginings, getting upset when the reality of the supposed film screen interferes with the film. No man or woman should be reduced to a film screen, and neither should a Christian church. The only truly appropriate show I can imagine projected onto St. Peter's would be live news footage of  the Second Coming.

***
*BA says they could make her a cardinal, and then she would be Cardinal Burka

Update: It may be that the woman is begging in the photo. If so, her misery is certainly not due to climate change, nor to capitalism, but to cultural horrors that Christians resolutely oppose.
Posted by Mrs McLean at 13:51