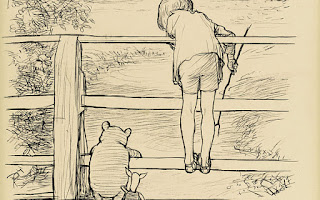 Today I was late in writing up my Christmas column for the CR for I was entertaining two little Edinburgh girls and their mother. Now I feel very Christmassy indeed, even though by family standards I cheated by having a tin of Cadbury's chocolate cookies to hand instead of proper home-baked cookies. Family pride was saved by the presence of Chocolate Piernik (gingerbread), which I thought the girls might not like, as it is stuffed with chopped prunes and candied ginger. The youngest loved it, however.

This may sound fatuous, but I do like children, especially tiny ones. The youngest are rarely self-conscious and just wriggle about doing their own version of Pilates or suddenly decide to take naps in the middle of the carpet, which I often want to do at parties. They are not at all shocked or disapproving if you join them on the floor, as I did, for I wanted to see if I too could tuck my feet behind my head. You can't really get away with this sort of thing when all your guests are adults.

I was a bit worried that the children would be bored, for we have no proper toys. However, we have a large collection of toy owls--owl cushions, owl doorstops, woolly owls, brass owls, wooden owls--plus my old, immensely long-suffering teddy bear and a hedgehog cushion. I assembled them all together in the sitting-room, and I think my small guests were a bit awed that one grown-up could own so many owls. They consumed milk, chocolate biscuits and cake, played with the owls and made them a nest, and I felt our "elevenses" was as successful as a dinner party.

Afterwards I walked my guests through the woods to the bus stop, but despite the rain, the children were in no hurry. The youngest was fascinated by the stream and stood about staring at it, looking like an illustration in a classic English (or Scotttish) children's book. When I was three and four, I lived in England, and I have very fond memories of being three and four and playing in woods. In fact, I like everything and everyone that reminds me of that time which is yet another reason why I fell for B.A.
Posted by Mrs McLean at 16:47