To be in England 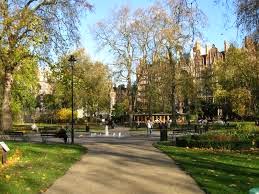 Do or did your mothers come out with random exclamations? My mother used to sudden declaim, "Oh to be in England, now that April's there." I see now that this is from a poem by Robert Browning. In the 1950s Canada still considered itself a loyal daughter of Empire, so I bet Mum was made to memorize it in primary school.

The second verse is about England in May.  It's very pretty.

The "gaudy melon-flower" suggests that he is in Italy, and thus he is just being a drama king. I cannot imagine sighing for England during an Italian April  although I can well imagine it in Italy's cruelly hot August. Browning should see Toronto in April: night frosts, torrential rain, daffodils half-drowned in the mud.

Anyway, I am thinking a lot about England, for I will be going there in mid-May for my friend Sister Mechtilde's First Vows at Saint Cecilia's on the Isle of Wight.  I hope to stay in the Guest House, for Benedict Ambrose won't be going, and how depressing it would be to stay in an English hotel without B.A. Then I hope to go to Kent to see my dear Calvinist Cath, and from there to glorious London for two days. I have to go to London; I have ready paid my train fare from King's X back to Edinburgh.

I am quite excited about it all, though it would be more fun with B.A.  However, B.A. doesn't like London, or says he doesn't like London, which is quite another thing. He seemed to like it when we were there last June, and why shouldn't he? It is a paradise of art galleries and museums.

"It's too big," he says, like some Ontario hillbilly complaining about Toronto. "It's too expensive."

Being from Toronto, I don't understand the concept of "too big."  A big city is like a country of its own; nobody expects you to cross it on foot in a day. You pick your neighbourhoods, and you stay in them. You are magically whisked from one desirable spot to the next by bus or train. A quick check of the internet tells you which neighbourhoods to avoid. There are many cafés in which, for £2 or 3, you can sit and rest your weary feet.

But of course it is too expensive. London is obscenely expensive. In fact, I may be underestimating the cost of that foot-soothing sojourn in the café. And thus the very best preparation for a trip to London is to arrange to have friends move there and buy you a sofa to sleep on. Unfortunately, though, if all your London friends are graduate students, or just under 32, they all live sixteen to a room with no space left over for you. In this situation, you have to find a long-lost cousin in Sussex and talk your way in.

So why go to London? Well, personally I get a chemical high just thinking about London. Synapses are zipping and popping about in my brain shouting about 50% of the novels and biographies I have ever read. Shaw was there and wrote Pygmalion. Woolf was there and wrote Mrs Dalloway. Waugh was there and wrote Brideshead Revisited. J.M. Barrie (a Scot) was there and wrote Peter Pan. Muriel Spark (another Scot) raced there ASAP and wrote A Far Cry From Kensington.  Mordechai Richler (a Canadian) went there and wrote Duddy Kravitz. Georgette Heyer was there and recreated 1804 on paper over and over again.  Indeed, the importance of London for English-language Literature is unparalleled. Just walking around looking at street signs brings back dozens of happy memories. (I must remember to reread The Napoleon of  Notting Hill before I go.)

Then there are the famous squares of glorious architecture and the beautiful gardens. And there are art galleries and museums and shop windows of unparalleled expense.  There are cemeteries and church floors full of the famous dead.

Above all, London is the centre of Empire, if only in the imaginations of overly romantic Colonials like my mother, whose parents bought a television before the Coronation. Naturally, Benedict Ambrose, born and bred in Dundee, does not get that. For him the epitome of romance is Edinburgh, and I admit that Edinburgh is pretty great. But Edinburgh, at the end of the day, is the capital of a small if honourable nation. London is London.

Anyway, I will be in London on May 15 and May 16.  If readers would like to meet up for a £3 coffee, let me know. I shall mostly be living on Co-op sandwiches in a cardboard box outside Saint Pancras Railway Station.