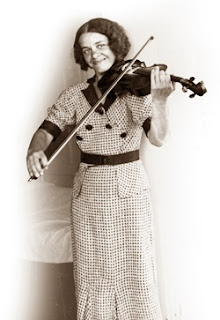 Good morning, poppets! A girl named Natalie emailed me this week to ask if there was an English-language Life of Blessed Natalia Tułasiewicz, and to the best of my knowledge there is not. Perhaps we need one, and this is something I could get working on in a few years.

In the meantime, I promised to post the "Blessed Natalia" part of my Kraków lecture "Catholic Heroines of the 20th Century." After all, when a Natalie asks for information on a potential patron saint, how can I say no?

So here is the excerpt, which works very well with Seraphic Singles Saturday, as you will see. It was written with a simultaneous translator in mind, so it may seem a bit choppy!

My second heroine, Blessed Natalia Tułasiewicz, was born in 1906 in Rzeszów and died in Ravensbrück Concentration Camp in 1945. She was the second child of a tax inspector, and first moved here to Kraków in 1914. She moved to Pozńan in 1921, where she attended Saint Urszula’s Secondary School (w Gimnazjum Urszulanek Unii Rzymskiej). She studied Polish philology at the University of Pozńan and music at the Conservatory. She was a very devout Catholic, and wrote that she wished to strengthen her faith by good deeds and studying. Reflecting on the fact that men and women are made in the image of God, she wrote: “It is precisely our reason that makes us creatures similar to God (Przecież właśnie rozum nasz czyni nas stworzeniami na obraz i podobieństwo Boga)”.

She wrote her master’s thesis about [EH: famous Polish-Lithuanian poet Adam] Mickiewicz and music, combining her love of Polish literature with her love of music. Unfortunately, her musical training was interrupted because she contracted tuberculosis, and she had an operation on her throat. She finished university in 1931 and had meanwhile begun her teaching career. She was active in the Association of Teachers of the Polish Language and also in a Marian sodality. 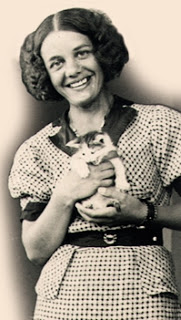 Despite her great love of God, Blessed Natalia did not feel at all called to become a religious sister. It was very important to her that she remain and work for God in the world as a laywoman. And at first she thought she would do this as a married woman. In 1927, when she was 21, she became engaged and remained engaged for seven years. Unfortunately, her fiancé was an atheist and a communist, and so Blessed Natalia ended their relationship in 1934.

But rather than being brokenhearted, she felt that love had tied her even more to earthly life in the world. The love of God, she wrote, had made her heart so powerful that nothing could break it. “It seems to me that I am on the path to a new era in my life, a path that is difficult but worthwhile. Now I love life more than ever before. I have always loved it in God, today I desire in the fullest sense to live in God!” (Wydaje mi się, że zdążam ku takiemu właśnie okresowi życia—ku własniej, trudej, ale wartej trudu drodze. Dziś kocham życie jeszcze więcej, niż kochalam dotychczas. Kochałam je zawsze w Bogu, dziś je pragnę w pewnym sensie zwyciężyć w Bogu!)

Blessed Natalia thus gave herself totally to God but in such a way that she could find and achieve holiness in the everyday, modern world. She wrote, “I have the courage to become a saint. Only holiness is the fullest form of love, and so I don’t just want but must become a saint, a modern saint, a theocentric humanist.” (Mam odwagę chcieć być swiętą. Tylko świętość jest najpelniejszą miłością, więc nie tylko chcę, ale muszę być świętą, nowoczesą święta, teocentryzną humanistką!) She qualified as a state teacher and wrote as well as taught: poetry, novels and newspaper articles. She received much attention for her travels with the famous ship “Batory” in 1937. In 1938, she went to Rome for the canonization of Sw. Andrziej Bobola and travelled all over Italy.

Then in 1939—disaster. On November 10, 1939, German soldiers came to Blessed Natalia’s family home in Pozńan in the middle of the night and threw the whole family—and all their neighbours—into the street. Blessed Natalia had just enough time to leave a note imploring whatever Germans were given their home not to destroy their books and manuscripts and to water the plants. Then the family was forced to live in a transit camp, where conditions were very bad, before being packed on a freight train, like animals, and transported to Ostrowiec Świętokrzyski.

Here they lived with an old woman, the nine of them packed into one room. Blessed Natalia decided to go to Kraków and find a job. She got one public one, working in a private library, and one secret one, teaching in a clandestine school. Also in violation of the rules of the German Occupation, she led weekly literary meetings and monthly sodality meetings. She was befriended by Polish aristocrats who gave her work and intervened to keep her in Poland when she was ordered to become a labourer in Germany.

However, in 1943 she changed her mind about going to Germany. That was the year she visited her friend Brother Tadeusz near Warsaw, just as the Warsaw Ghetto was burning down. Her feelings of compassion for these people she could not help, except in prayer, led her to a covert mission to Germany. She joined a conspiracy called “Zachód” [ EH: i.e. "West"] , run for the Government-in-Exile by two priests, ks. Ferdynand Machay and ks. Kazimierz Świetliński. [EH: Ks.=ksiądz, priest. In Poland a secular priest is addressed as "Priest <Surname>. A priest in a religious order, however, is called "Father".]

Zachód trained her to help Poles doing forced labour in German emotionally, spiritually and intellectually. On August 18, 1943 she went voluntarily to Hamburg to share the forced labour. She worked in a factory and secretly taught religion, Polish orthography [i.e. spelling] and German to her fellow workers. She organized prayers and singing. As she wrote to her sister: “Only here do I fully realize how valuable is my life of solitude and my secular apostolate. And I realize how important it is to go outside and fill in the gap between a saint in a monastery and a layperson outside. I would simply say: let us leave with the holiness in our souls to streets! " (Tu dopiero w pełni przekonuję się, jak cenna dla drugich jest moja życiowa samotność i moje powołanie świeckiego apostolstwa. I przekonuję się, jak palącą kwestią jest, aby wyjść z ukrycia własnej kapliczki właśnie ku światu, aby wypełnić tę przepaść, która dzieli świętego w klasztorze od człowieka świeckiego. Powiedziałabym po prostu: wyjdźmy ze świętością w duszy na ulice!” ).

Sadly, the Germans discovered her activities. They arrested Blessed Natalia in April 1944. She was sent to jail in Hanover and then Cologne. She was tortured and beaten so badly, she bled from the scars of her old surgery. But despite her pain, she prayed and adored God every night. She never betrayed her fellow conspirators, and she wrote that she did not feel humiliated by the Germans: she felt supported by God, and wrote that her bad treatment did not make her give up; instead it taught her to be modest and happy.

In September 1944, she was sent to Ravensbruck concentration camp for women. There she continued her mission by caring for her fellow prisoners, teaching them and having weekly literary meetings. Already suffering again from her lungs, Blessed Natalia was sure she would die, but she did not despair, for she believed that her death would be God’s will and therefore bring about good.

Of course there were no priests in this women’s camp. Blessed Natalia herself led a religious service (nabozeństwu) on Palm Sunday, 1945. But during the week she became so weak and sick that on Good Friday the Germans took her out of line during the morning inspection. She was sent to die in a gas chamber on Holy Saturday, and then her body was burned. Just a few days later, the Germans fled the camp before the Russian advance. 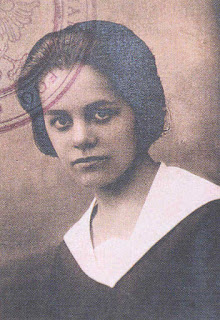 Blessed Natalia was beatified by Saint Jan Pawel in 1999, one of the only two laywomen among the 108 Holy Martyrs. As yet, she is not famous in the English-speaking world. There are not many English-language materials about her. But I present her because I think it is important for Polish women to know about modern Polish female saints, particularly one who never married or became a nun, one who was determined to find holiness in the world. And because she never gave up, despite disappointment, illness and war, I think she exemplifies perseverance.

****
from  Dorothy Cummings McLean, "Catholic Women of the 20th Century" (paper presented at the Dzielne Niewiasty ["Brave Women"]  Majówka dla Kobiet [May Retreat for Women] Krakow, Poland 2-4 May, 2014).
Posted by Mrs McLean at 09:57