My Latest Visit to Poland Part 1

Hello, my little dumplings! How are you all? I have returned to Edinburgh from Poland with

I didn't blog here yesterday, for I spent from dawn to dusk writing my Catholic World Report story. Oh, cherubs. Somehow reading Polish was easier in Poland. I had quite a pleasant shock on the bus from Wrocław to Kraków when I realized I could actually understand 75% of an interview in Newsweek Polska. However, it didn't last, and in the end I had to resort to Google Translate.

So let me see. On Thursday night I arrived in Kraków Airport and took a cab with some other wedding guests, and chatted gaily with the elegant silver-haired driver until I realized that his English was better than my Polish. Then I shut up, more or less, until I got to my publishers' guest house in Podgórze. I was greeted in very fast Polish by a seminarian, who offered to prepare me some supper, and who claimed he couldn't speak much English. But then he sat across the refectory table from me and spoke reasonably good English over a yogurt while I ate cheese, ham, tomatoes and bread.

On Friday morning I had a long conversation with Father Paweł over breakfast about what sights I might see in the Kielce area on Sunday before we gave up all these plans as impractical. Then I zipped out into the crisp air and beautiful sunshine to buy my Monday ticket to Wrocław and also a ticket at the Słowacki Theatre for Friday night. I had never been out in Krakow after dark by myself, so this would be an adventure. I was suffering from terrible caffeine withdrawal, so I went to the National Gallery in the Cloth Hall, bought a ticket to the permanent collection and immediately zipped up the stairs to Café Szał for an enormous cup of coffee. So intent was I on this coffee, that I didn't realize I could have sat with it on the balcony of the Cloth Hall, which has the best view of the Main Market square below.

Thus fortified, I had a happy hour and a half in the four chambers of the National Gallery, reading all the learned explanations in Polish, and then in English, one paragraph at a time, watched by the mildly diverted security ladies.  I was last there two years ago, and I understood everything a lot better this time, e.g. who Wanda was and why she wanted to throw herself into the river.

On my first visit, my favourite painting was "Smierć Ellenai" (The Death of Ellena), but now my favourite is "Sejm Bociani" (Gathering of Storks).


I confess that I still didn't know who Ellena was, but now that I have access to the internet, I see that she is out of a poem by Juliusz Słowacki called "Anhelli". Meanwhile, I had a good giggle at "Szał" ("Frenzy"), which is not safe for little brothers, so I won't post it. (It's a naked lady with big fuzzy reddish-blond hair on a wild-eyed, foaming-at-the-mouth black horse.) Apparently its creator also thought it wasn't safe for little brothers, for he went berserk and slashed it up with a knife. It has been beautifully repaired, but you can see the marks if you look. Anyway, it is a very funny picture if you have a lot of big fuzzy reddish-blond hair, and now I have ruined it for all my Polish readers, who will now have to think of me when they see it. Ha ha ha!

When the Hejnał bugle sounded at one,  I telephoned to my Single friend, who had arrived from Edinburgh in the morning, and we met beside the statue of Adam Mickiewicz before going to lunch at the Hungarian restaurant Balaton on ulica Grodzka. My friend grumbled a little bit, as she wanted to eat something "local", but I assured her that the "Hungarian" food was pretty local, and soon we were chowing down on giant potato pancakes.

Afterwards we rolled off in our separate directions, she to Wawel Castle, and me to Szaleo in Podgórze to buy a new mohair beret. If you are over a certain age, a mohair beret in Poland is a symbol of conservative Catholicism, Polish patriotism, whacking foreigners with handbags, etc. As it happens, I am still under that age, but the women of my family have always worn berets, and I tend to lose mine, and they are cheaper in Poland than in either Canada or the UK. This one was 17 złoty, which is about £3.50 ($7 Canadian).

In the evening I had a small supper in the refectory and then went off, heart beating fiercely, into the Polish dark to see Romeo i Julia in the Słowacki Theatre. The theatre is an amazing building, a cross between a renaissance palace and a giant wedding cake. It really puts the roque in Baroque. To my surprise, my fifth row ticket put me in the third row and so I had a really good view of the stage, which had a Classical backdrop of half-naked gods and goddesses and all that.

From the inside the Theatre looks like an old-fashioned opera house, such as people are always going to in Georgette Heyer novels, with elegant boxes in the balconies. There were adults of all ages and a surprising number of teenagers. Everyone was relatively dressed up, and everyone chatted with their neighbours in Polish--except me. I sat there as meek as a muskrat, feeling very awed by all the Central European grandeur. And then the show began with a dramatic Elizabethan dance (and costumes) which suddenly exploded into rock-and-roll and  Jerome Robbins-y dance-fighting and it was all very Artistic and impressive and I understood about five words for the next three hours. By the intermission (two hours in), I was so exhausted, I couldn't even remember the crucial words "How much does it cost?" which I needed so as to make change for my tram ride back. Fortunately, I got a hold of myself, bought some tic-tacs and thus got change. 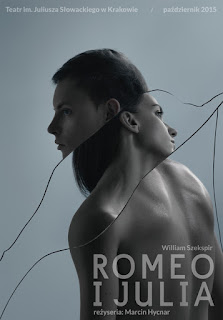 Well, all I can say is that I was very glad it was Romeo and Juliet, for at least I understood what was going on, and I enjoyed the dance segments--although some of the dance-music choices (all English-language) were a bit jarring for the circumstances--and the actor playing Benvolio was a dead ringer for the late Heath Ledger. (Romeo strongly resembled Lawrence Fox, whom I quite fancy.) But by Act 3 my Polish-learning ego was squished flat, and I kept thinking "Okay, kids, die already." When they did, a sweet Polish 20-something in the front row actually wept. Maybe she had never seen it before. (I wept inconsolably when I first saw it, i.e. at age 10 or so.)

By the way, the Prince was played as if he were Putin, and he actually strangled a coked-up whore, whose corpse fell on Tybalt's, which was a rather impressive addition to the plot. Lord Capulet was played as a sort of rich thug, Lady Capulet--drop-dead gorgeous--sneered at him and lit cigarettes throughout, Tybalt looked like Goliath, only hot, and poor Count Paris showed up with progressively larger teddy bears. Juliet looked about thirteen, so it was very embarrassing when she stripped down to her white underwear and rolled around the stage with Romeo. Oh, and the man beside me was scandalized when Romeo grabbed the "cross" Friar Lawrence wore around his neck and threw it across the stage. Sharp intake of breath and stiffening of shoulders. I was quite edified by that.

Afterwards I joined some young drunks at a tram stop and was startled when one harassed an Arab-looking guy who got off another tram. The foreigner marched away and stood quite a distance away from the stop, even after the drunks toddled off, which surprised me until I remembered my foreigner-whacking mohair beret. Later one of my Polish friends told me that there would never be sustained riots of refugees in the streets of Kraków because the local men would pour into the streets with baseball bats, which would settle the situation in 15 minutes. (Note to refugees & "refugees": Never mind Poland; just go directly to Germany.)

I got back safely to the "klasztor" and went to bed. In the morning I was up bright and early, packed my bag for Kielce and went to the meeting point behind the Hotel Wyspiański on ulica Westerplatte. There the assembled wedding guests shook hands, put our stuff in the minivan and waited in vain for two missing Russians and an Italian. Where were they? Where could they be? At last a particularly mild-mannered and domesticated Russian made a well-educated guess, and we all piled onto the minibus to the missing men's lodging, where they were still recovering from the night before. Led by the domesticated Russian and the Polish de facto leader of our expedition, they climbed aboard, wearing sunglasses and smelling very strongly of cigarettes. Their reputation was cemented by a tall, elegant, cigarette-smoking Polish girl who turned up at the last minute to slap her hand on the door.