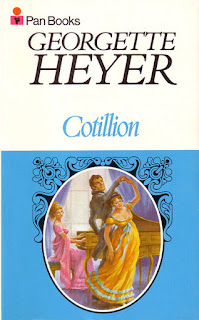 WARNING:  Spoilers galore. Do not read if you have not yet read Georgette Heyer's Cotillion, aka the one in which Kitty has to marry one of her cousins in order to inherit great-uncle Matthew's loot.

Really, I mean it. Spoilers. Go away to read the book and only then come back.

My favourite of all Georgette Heyer's novels is Cotillion, and that is saying something, as a Heyer novel is to my adult life as a chocolate Easter egg was to my childhood. My mother's collection of Heyer novels had Easter-egg-coloured covers, and I was delighted to find a copy of her edition of  Cotillion, in perfect nick, in a used book shop last week.

Cotillion is my darling because of the Honourable Frederick Standen, aka Freddy. Much of Freddy's charm stems from the fact that Freddy is an early 19th century Bertie Wooster, only with his own unerring instincts about social life taking the place of Jeeves.  Freddy is funny, kind-hearted, reliable and easily imposed upon by a clever young woman. You can also take him out in public because he is perfectly dressed for any occasion:

The young gentleman who alighted from the chaise must have been recognized at first sight by the discerning as a Pink of the Ton for ... none but a regular Dash, patronizing the most exclusive of tailors, could have presented himself in so exquisitely molded a riding-coat, such peerless breeches, or such effulgent top-boots. [...] When he strolled into the inn, and shed the somewhat deceptive driving-coat, he was seen to be a slender young gentleman, of average height and graceful carriage. His countenance was unarresting but amiable; and a certain vagueness characterized his demeanour. When he relinquished his coat, his hat, his cane, and his gloves into the landlord's hands, a slight look of anxiety was in his face, but as soon as a penetrating glance at the mirror had satisfied him that the high points of his shirt-collar were uncrumpled, and the intricacies of a virgin cravat no more disarranged then a touch would set to rights, the anxious look disappeared, and he was able to turn his attention to other matters.


Freddy appears to be an airhead, but the reader does not notice this quite as much as she might, for she has already been introduced to Freddy's cousin Lord Dolphington. Lord Dolphington's conversation and behaviour are so strange that one might be tempted to think he has a form of autism were he not a figment of Georgette Heyer's rich imagination. (Meanwhile, the only man I ever met who was as silly as Dolph had enormous aptitude for his studies.) Cotillion was written in 1953, and to use the parlance of 1953, Dolph is a moron.

But Freddy and Dolph are not the only contrasts in the book, and I think it is the contrasts, as well as the plot, that make Cotillion so enjoyable. All the characters are played against each other. Let us examine the principals:

First there is Great-uncle Matthew, an aged and bad-tempered, very wealthy miser, contrasted with his 20-something year old nephews.

Then each nephew is played off against the other, which is easy, as they don't really like each other and most are rivals for Uncle Matthew's fortune.

George, Lord Biddendon: the eldest, ugly and bad-tempered, but the head of his own family and fortune, strongly family-minded, and so not caring personally about the loot. He wants it for his brother Hugh.

Lord Foster Dolphington: a silly-billy only-child who is terrified of his own mother and yet is socially a cut above everyone else, for he is an Earl. (George is only a Baron, as Dolph points out.)

The Honourable Frederick Stanton: well-dressed, highly respectable, and does not (very unusual for a Heyer hero) employ or hire prostitutes (of any class) or conduct affairs with naughty married women. (He is the heir apparent to a title, albeit not as grand a title as Dolph's.)

Claud Westruther: absent, notable only for the fact he once chopped the head off Kitty's doll.

And naturally all these men are contrasted against an intelligent, mostly uneducated, plainly dressed, but cheerful and high-spirited teenage girl named Kitty Charing, Uncle Matthew's ward.

As an amusing contrast to both bad-tempered Matthew and young Kitty, there is Kitty's rather silly, romantic, poetry-quoting, forty-something governess Miss Fishguard aka Fish.

Jack's absence, plus Uncle Matthew's ridiculous demand that all his nephews offer to marry his adopted daughter Kitty, is the engine of the plot. Kitty has a crush on Jack and is seriously miffed that he didn't turn up with the other cousins to claim her hand in marriage. She is less than thrilled when her other cousins attempt it, especially when the Hon. and Rev. Hugh claims he's not doing it for the money but to save her from a Miss Fishguard-like fate.  So it is not surprising that Kitty A) runs away and B) embroils the kind-hearted but slow-witted Freddy in a plot to make Jack jealous, telling Freddy that she just wants a month's holiday in London.

It's a fantastic plot, really. So much can go wrong, and there is so much scope for character revelation and--even more important--character development. Naturally there is the lovely restrictive structure of early 19th century London high society which makes it almost impossible for unmarried society women to do anything they want to do, while affording men of the same class almost unlimited license. Boundaries are important in fiction. And, as in high school, everyone interesting in Heyer's world enjoys pushing the boundaries as far as they can without getting caught.

Thus we have Freddy's sister Meg, i.e. Lady Buckhaven, as a lovely contrast to Kitty, for she is blonde, married, her husband is away, and men can have all the fun of flirting with her without the risk of having to marry her or public censure for their beautiful lies about dying of love. Life was rather more fun for married women in Historical Houses then that it is now, except for all the dying in childbirth, but never mind that. It's not like my husband is going to China without me for a year. Where was I?

Oh yes, contrasts. Meg is also a contrast to her brother, for he has perfect dress sense, which he imparts to Kitty, and to her mother, Lady Legerwood, who is much older and also has perfect dress sense. Meg's terrible dress sense is also useful for getting Kitty believably dressed in finery on the cheap because rich Meg keeps buying clothes that don't suit her but on second thought will suit Kitty. The problem of dress is extremely important in a Georgette Heyer novel, and something all we girly girls can identify with, or could in 1953.

Lord Legerwood, Freddy's father, is incredibly intelligent (apparently) with real intellectual interests, and so he makes both a nice contrast to Freddy and a reliable witness to Freddy's character development over the course of the novel.

Naturally all the revelations about Jack's character, e.g. that he is quite a rake, put him in greater contrast to the sexually pure Freddy. ("Oh, I say, Seraphic. Dash it.")

Really, I am all about Freddy. I am fonder of Freddy than I am of Kitty although I imagine Georgette tried to even things up by comparing Freddy's kindness to Kitty to Kitty's own kindness to the bird-witted if beautiful Olivia, whom wicked Jack wishes to make his mistress. But I think to really win my heart, Kitty would have to make some sacrifice to save Freddy's life. Merely deciding that Jack isn't half the man Freddy is, isn't enough for me. I'm glad for her, of course, but ... she's not Léonie or even Frederica, is she? (Don't talk to me about Mary Challoner. Ugh. Shudder.)

Meanwhile, Georgette does something absolutely brilliant by restaging the opening scene in Uncle Matthew's neighbourhood at the end of the book. The nephews and Kitty are together again, and the climax is just fantastic. Naturally my favourite part is when Jack gets what is coming from him from Kitty, he insults Kitty and Freddy knocks him down. And then the Reverend Hugh, whom I sudden realize I must rather fancy, drops his prosy clerical persona:

It may be odd to think this, not the heart-warming scene between Freddy and Kitty that follows, the most satisfying moment in the whole book. However, it was certainly nice to see Jack get his comeuppance, and to see Freddy assert himself, and for the Rector to reveal that he is actually a human being and a boxer. (I have a high regard for amateur boxers.)

Could it be that the Honourable and Reverend Hugh is one of the progenitors of my own beloved Honourable and Reverend Hewbert? I have never considered this before, but it seems likely. The Problem of the Reverend Hugh Biddendon is that he is both a man and a clergyman, and sometimes one is at odds with the other. And the brilliance of Georgette's creation of him is that this one line, delivered at so violent and thus memorable a moment, tells this story.

Incidentally, there should be no such thing as a "throw-away character"when you are writing--a lesson Georgette teaches us very well. But meanwhile, in terms of writing character-based fiction, contrasts, contrasts, CONTRASTS.