Affirming Your Boundaries with a Smile 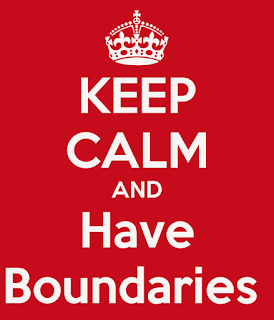 It's Seraphic Singles Saturday, and I hope I can rise to the challenges of guru-dom as I have been felled by a horrible head-cold. I am not feeling terrifically brainy right now, so it is a good thing I got the Dear Auntie Seraphic letter some undisclosed time ago.

To protect the identity of your fellow reader, I shall just tell the story. In short, she was chatting away after Mass, greeting strangers in her hospitable way, when a new young man asked her out for coffee. Remembering my dictum of "It's just coffee!", she said she'd be happy to meet for coffee, and they exchanged phone numbers, emails, etc.

But then the young man contacted her about having LUNCH. Your fellow reader froze. She had said yes to coffee, but now Mr New Guy was saying lunch.

Now, your fellow reader is a very busy woman and the only time she has to have lunch with people is on Sundays after Mass, a cherished time slot she dedicates to her friends every week. However, she felt honour-bound to have lunch with this chap, so suggested the following (not "this") Sunday.

Mr New Guy, after sending long and friendly emails to our heroine all week, turned up early to Mass on "this" Sunday, hovered at her elbow and made it clear that he expected her to sit with him. In the nicest way, she hinted that she would not be sitting with him but as usual with her friends. Nevertheless, he stressed his hope she would sit with him at Mass, joking about how to make himself more visible.  Our heroine felt awkward about the whole situation and very sorry she had agreed to lunch. She wrote to me to ask what she should do.

I read her email, thought about it, went to sleep, woke up, read it again and ruled that she had grounds for saying she had double-booked for Sunday and had a prior obligation to her friends. Usually I would never suggest a woman break a date--except for reasons of safety or a family emergency--but in this case, it seemed to me that the longstanding permanent lunch date with friends was necessary to the mental health and flourishing of my hardworking reader. Besides, it was clear she didn't want to have lunch with this man, and only agreed to because she thought she "had" to.

I suggested that she apologize for the double-booking and say what would have been easier at the time, which is that she is too busy right now for new lunch engagements, but was open to having that coffee. And this, I felt, would be generous of her after the awkwardness of his Sunday importunity. The young man's behaviour suggested that he is lonely and desperate, and it is not nice when our fellow Catholics, new to our communities, are lonely and desperate. Naturally we do not want them to take a mile when we offer them an inch--a habit all too common to the socially awkward--but "I was a stranger and you welcomed Me" is something we all want to hear on Judgement Day.

The truth is, a longstanding member of a community--with a group of friends in it, with a weekly lunch date--has a confidence and social clout a newcomer does not have. Under this circumstances, it should be easy to say "Howdy, stranger" to someone new. However, it should also be easy to say, "Whoa. Steady on there. I'm happy to do X, but Y is inconvenient."

There are lots of kinds of Single people, but this story is about two kinds: the Single who grabs onto anyone friendly like he or she is drowning, and the Single who thinks he or she "HAS" to give up cherished time with friends or other beloved activities to "get out there" and "go on a date" if he or she is serious about wanting to be married. And here am I to say "Stop that" to both.

I've wailed dozens of times about all the time I wasted on dates when meanwhile the man I was meant to marry was across the ocean in Scotland.* However, I suppose all those dates helped make me the woman Benedict Ambrose fell in love with, not to mention a good source of dating advice. And one thing I have learned from Single-and-dating-ness is that you shouldn't go to boring parties just "to get out there." Meeting a fellow Catholic for a coffee because he is new and "I was a stranger..." is a good thing to do. But giving up much-loved girl-time to meet a stranger just in case he is the One--nope.

A coffee is just a coffee. Lunch with a stranger is a date. Whereas I think Searching Singles should have lots of coffees--even married Auntie Seraphic goes for coffee with Single pals, male and female--I don't think anyone HAS to go on a date with a stranger. Naturally, you don't HAVE to have that coffee either, although I think you should (unless the guy is a proven animal). First coffee, and if he's a nice Catholic boy you like okay as a friend, two dates before you decide you're just never going to click. (Rarely can you tell on the first date; few people are at their best on the first date.)

Let your coffee be coffee, and your lunch be lunch. If someone asks if you'd like to have coffee, and you say "All right!" and then he tries to change it to lunch/dinner/movie/trip and you feel nonplussed, simply say "No, thank you--too busy. But I wouldn't mind having that coffee." If he argues, he's a drip, and I give you full permission (not that you need it) to say, "I change my mind on that coffee. Clearly you're not the kind of man who respects boundaries."

*To be fair, the older I got, the more fun these dates tended to be, and I certainly ate a lot of very good meals and had a lot of interesting conversations. Credit where credit is due, and in hindsight I was a terrible, disloyal girlfriend before I was 24. In a book, I would have come to a bad end, dying of consumption like Ruby Gillis, but as you can see, I have not.
Posted by Mrs McLean at 11:25