The Healing Calm of the New Town

Embra! Ancestral city!
You are like wealth.
Only she who has found you late
(as if by stealth)
in life can your charms rate
most adequately.

That is my  homage to Adam Mickiewicz's "Inwokacja" in his epic poem Pan Tadeusz. I think it is quite funny, but then I spent a hour every morning one Christmas holiday in the countryside memorizing the "Inwokacja." Why ask way?

As a tiny child I lived in Cambridge (England), and the year created a little Cambridge-Eden in my memory. This had almost nowt to do with the glorious university architecture. As a tiny child, I took all that sort of thing in my stride. My family lived in student housing near the Botanical Gardens, and I believe where we lived used to be part of the Botanical Gardens. At any rate, it had woods and meadows and, if no real pond, then certainly a raised duck pond.  But I was not blind to all architecture, for one day when leaving some house with my parents I looked up at the door and saw either in it or above it a window of this shape: 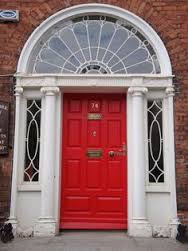 That window made such an impression on me that I have loved the top-half of a circle passionately all my life. Being the eldest of five, I got to play with wooden blocks for many, many years, and my favourite was the one, the only, the unique half moon shape cut out of one of the rectangles. (The resultant arch was my second-favourite block.) As the block box didn't have much in the way of architectural trimmings, our grand designs were either Georgian or strictly postmodern.

Alas, there is not much Georgian architecture left in my native Toronto. The Americans invaded and burned it down in  1813, and then there were various Great Fires, and since the Great Fire of 1904, Torontonians haven't given two ticks for preserving their historical architecture.  If there is a really loud outcry, a  giant truck comes along and takes the building away to land deemed less valuable than the land it is sitting on. Toronto self-cannibalizes to this day.

So imagine my joy to live now in beautiful Edinburgh, where old buildings are cherished and loved and preserved and miraculously spared by German bombers in World Wars both I and II. Edinburgh's "New Town" (with the partial exception of Princes Street, which was almost destroyed by the Spirit of Vat--I mean, by the rage for Brutalism) is a beautifully preserved Georgian masterpiece with half-moon "fan lights" topping doors up and down the cobbled streets.

I live not in the New Town, but on one of Edinburgh's very edges. There is no fan light over the door of the Historical House, alas. (Not that I'm complaining, exactly. The House is pre-Georgian, after all.) However, I have many opportunities to go to the New Town, and do. And if I am alone and have time to walk through the streets--especially any time between 9 and 5 on a weekday--the straight lines and curved half-moons fill me with calm and optimism.