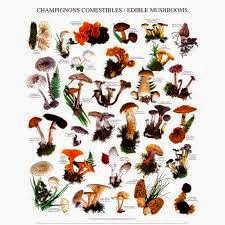 I have kissed Alban the Seminarian Pretend Son goodbye, weep weep, and done a lot of washing, dusting and hoovering. It is time for lunch, and I am pondering whether or not the pasta in the fridge leftover from Thursday night is still good. Hmm, hmm.

The pasta dish was made by Alban. He said that he can't cook and give dinner parties at the seminary, so I suggested he cook dinner for us. So on Thursday Alban kindly went down to his old haunt Real Foods and rummaged around for organic whole wheat pasta and exotic mushrooms. Then he came back and made a sort of pasta carbonara, only with streaky (strip) bacon instead of pig's cheeks.

The mushrooms were hedgehog mushrooms, and they were so delicious, I wondered why B.A. and I don't eat different varieties of mushrooms more often. The proposed answers are 1. they are more expensive than button/chestnut/portobello 2. there isn't a wide variety of them at Tesco, 3. we are scared of them. That is to say, I am scared of them. Which is silly. It's not like people just gather any old mushroom and sell them to Real Foods, right?

But ordinary button mushrooms are terribly good themselves. On Friday, we were all three invited to a dinner cooked by the Master of the Men's Schola, and he began with delicious mushroom soup involving button mushrooms and a delicious consommé.  I was delighted because I feared a cream soup would make me bilious and pass out at the table. And there was caviar, too, and a fresh, sharp and delicious sauce to go with the main course's pasta, and the option of custard (instead of cream) to pour on the hedgerow (apples and wild berries) crumble for pudding. And thus I never got a tummy ache, but---THUMP! I fell asleep at the table again.

Again I hope there is no photographic evidence. At least I fall asleep face down. The other habitual dinner party sleeper falls asleep head back and his snores evoke mirth. As far as I am aware, my collapse engenders, at most, mild concern in the particularly tender-hearted.

My current theory is that this particular dining room is akin to some comfortable dining room of my extreme youth, i.e. when I lived near Cambridge University, and the comfortable male chatter about subjects and people of which I know nothing makes me fall asleep as quickly now as I may have fallen asleep then. When you are three, you tend to be asleep by 9:30, especially when taken to British adult parties. I must ask my mother if I was taken to any.

Some traditionalists may think it is odd for men to cook, but most of the trad men I know cook. This may be in part because they are unmarried, but I think it is mostly that cooking is fun. It's creative. It involves shopping and tasting things and having ultimate control over what you and your loved ones eat for supper. The part that is not fun is cleaning up afterwards. This is why there is still a point in getting married or, less conveniently, hiring a housekeeper. Pragmatic women know that men really prefer not to do housework, to the extent of financially and emotionally supporting a woman who will do it for them, and so just get on with it and scrub the pots.

Personally, I do not think it fair for a woman to have to work outside the house all day AND scrub the awful pots, so a "career woman" is perfectly justified in hiring a charwoman or, as she is called today, a cleaner, and the poor working woman is perfectly justified in working only part time. If a poor married woman's working day is half house, and half job, she is less likely to resent her husband when he zones out in front of the telly after work. It's much easier to think, "Ah, he works a whole eight hours away from home, so it's fair."

No doubt there are zillions of feminist and patriarchal ("Nay! You must bring me a sack of money AND scrub my dirty pots!")  arguments against this, but it works for me. But let's not pretend home cooking for friends or a spouse is hard work. It can be tremendously fun. (I find making waffles great fun.) It can even be a hobby. Cooking day in and day out for children, on the other hand, is not so fun. Of course, at a certain point you can get the children to do the dishes. One ambitious child could even offer to do a sibling's share for a price, which would be a good lesson in economics.