She Knew Not How To Suffer in Silence 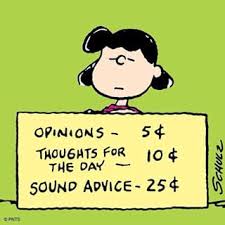 When I was grumbling about something or other as a child, my mother quoted with great maternal sarcasm, "It was frequently said of her, 'She knew not how to suffer in silence.'" It sounded so poetic, I assumed it was from the Bible or 19th century poetry. But now I have just googled it and its source is apparently Lucy van Pelt of  "Peanuts" fame.

The message seemed to be that it is noble to keep silent about one's suffering--which it often is, I imagine--and just crack on with things and smile, smile, smile.  I admire people who can do that unless they tell outright lies or don't speak out of sheer cowardice. It is really saintly, for example, never to mention how much physical pain you are in to people who can do nothing about it, so as not to embarrass them. I hope to be like that one day. "How are you, Seraphic?" "Oh, mustn't grumble!"

But frankly I do not know how to suffer in silence, and generally fuss and complain and shout and burst into tears, and I get away with it all because I work from home and have editors instead of proper bosses. Yay!

I am not always this way about actual relationships, of course. When I was younger, I would put up with outrageous behaviour from others without saying much of anything. I did not, for example, think of blowing the whistle on the sexual bullying of my playground until I heard some brat shout filth at my sister. Not only did I challenge him to a fight after school--absolutely bizarre behaviour for a girl in that milieu--I decided it was time to talk to the principal. And indeed, I have never shut up about childhood sexual bullying since I escaped.

The importance of keeping secrets was banged into my head during my three mostly happy years in the MDiv, and so I am pretty good at keeping other people's secrets. The perfidy of calling up the bishop and complaining about my profs was also banged into my head during the MDiv (mostly in a joking way), and so I was never tempted to report any of my profs to anyone for anything they said until one day in 2007 when I totally lost it. The subject of my ire had arrived later in the term, and by the time he actually taught a class, it was too late for me to drop it.

It was a terrible class, and not being able to drop it or keep my mouth shut, I argued all the way through. The prof got really frustrated, probably because he really didn't know much about dogma and doctrine, which he seemed to think were European colonialist impositions on Local Church.  (How he could have passed his Comps was a mystery to me.) When he described the torments of European missionaries who lost their faith in the dungeons of culturally superior Japan, he positively relished in their suffering. Take that, colonialist, white supremacist Christian missionaries! I did not say, "Whose side are you on?" but I came close. (I think I may have mentioned that my great-uncle survived a Japanese death camp.)

In Toronto, arguing with colleagues was great fun--I didn't argue much with profs, as whenever one failed his first lecture, I just dropped his course. In Boston, I didn't argue as much with colleagues as I did with profs and that was no fun at all, especially when they shrieked back or snapped the chalk or whatever. With colleagues what really depressed was just the ordinary stream of conversation about sex and intrigue and politics and racism and sexism and zzzzz.

The interesting thing is that some of my classmates were suffering in silence. Or at least one. One wrote to me about my CWR exposé, and what I found interesting is how much this person suffered despite his or her practice of keeping his/her head down and his/her mouth shut. It was a comfort because for a year after I left, I blamed myself for not being more prudent. Why couldn't I have just weathered all the storms? Why couldn't I have just let all the nonsense wash over me, nodded outwardly while cringing inwardly, pretended to be a fellow traveller, flattered the powerful, done the bare minimum to get to the Comps, written my thesis and gotten the heck out of Dodge?

Because it was all so unfair, that's why. It was totally unfair to pull a now-we're-Catholic, now-we're-not bait-and-switch on a poor Catholic foreign student who actually believes the Catholic faith has some resemblance to what John Paul II and Benedict XVI, not to mention all the Councils of the Church, says it is. And when I think something is unfair, I complain.

That said, I waited eight years to publish my complaints. Well, except for the story about the arm-twisting pastoral theology prof who acted like an officer of the KGB (or SB)  exhorting corrupt Polish seminarians: "How do we get the Archbishop to disobey Rome?"  I piped up about children's rights before anyone suggested beating him to death and stuffing him in the boot of a car.

There was, in fact, an openly gay student present, and as he was a really nice guy I liked lot, that made defending Roman Catholic doctrine (to all these Roman Catholics) even harder. It was simply an abysmal situation to place all my seminar class in, without warning, with complete strangers to witness the whole. Anyway, I did write about this in the Toronto Catholic Register some time ago.

But what I wanted to say is that despite having deep-sixed my academic career, I feel I am doing very well in the fields of Catholic discourse: I write, I'm published, people read what I say, and sometimes they ask me to come to them and lecture out loud. And to my shock, I discovered on Twitter today someone who had tweeted I am her "favourite female theologian." Oh man. How humbling. Thank you.
Posted by Mrs McLean at 15:38