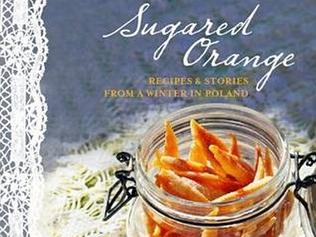 I have finally cashed in the Mother's Day present Julia of Australia gave me via Amazon. Thank you very much, Julia.

After dithering between Rose Petal Jam: Recipes and Stories from a Summer in Poland and Sugared Orange: Recipes & Stories from a Winter in Poland, I bought the latter. I had already read the former clandestinely in Waterstone's, actually getting teary over the ex-pat Pole's nostalgia.  I would have bought Rose Petal Jam on the spot were it not £25 ($35 Canadian being a bargain, as £25 is $50).

I will probably buy it eventually, but meanwhile I have Sugared Orange, and although I don't like it as much as Rose Petal Jam--too many pictures this time---I am eager to try out the recipes. Incidentally, either book would make a good Christmas gift to a Polish immigrant over 40 or a second, third, etc., generation Polish-Canadian/American/Australian interested in her ancestral heritage. 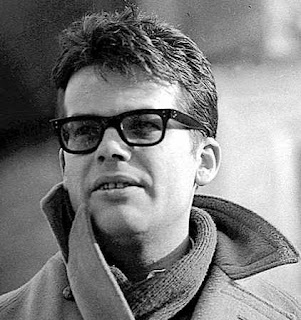 As you can see, it is Polski Piątek. I have nothing to say about boys today. Well, here's another photo of "the Polish James Dean, Zbigniew Cybulski. My friend Dorota says she was crazy about him when she was a teenager, and she watched every single one of his films. If you want to be all sophisticated-n-stuff, have a beatnik party and rent (or order or whatever you do now regarding films) Ashes and Diamonds because it is awesome and about Polish Catholic reactionaries assassinating Polish Communist big-wigs. The reactionaries are supposed to be the bad guys, ah ha ha ha ha ha. The Communist censor board must have been as dumb as stumps.

To return to cookbooks, I also have From a Polish Country House Kitchen by Anne Applebaum and Danielle Crittenden. Applebaum is an American Pulitzer Prize winning journalist married to a well-known Polish politician. I am told she speaks Polish beautifully, and so there is hope for me. Danielle Crittenden, also a journalist (and novelist), is from Toronto, who converted to Judaism before she married David Frum, the famous son of one of Canada's most beloved journalists, Barbara Frum. Thus, unsurprisingly, there are a lot of specifically Jewish recipes and some stories about  Barbara that Canadians who remember her would enjoy.

Writing a Polish cookbook when you are not yourself Polish must be rather daunting. Of course, Britons occasionally ask me if I don't find cooking Polish food for Poles rather daunting. To be honest, I never thought about it. I've been making potato latkes (called placki zimniaczane by Catholic Poles) since I was eleven. North Americans are less embarrassed by culinary cultural appropriation than Britons, I suspect.* Meanwhile, I can attest to the excellence of Applebaum & Crittenden's recipe for plum cake. It is super-easy, delicious and exotic enough to impress at dinner parties. My one concern is that it might be too sweet for the Polish palate, as the book was written for an Anglosphere audience.

Finally, I have Benedyktyńskie smaki i smaczki: Sekrety kuchni opactwa w Tyńcu ("Benedictine tastes and flavours:  Culinary Secrets of the Tynieć Monastery "). I bought it at the actual monastery, so my copy is a souvenir. So far I have only glanced at a few of the recipes, to see if I understand them. Flipping through now, I see that I have partially translated its recipe for plum (pear or cranberry) vodka. Goodness, that looks good.

*That said, one must not depend on British ingredients for foreign results. Finding (and preparing) the proper ingredients for either Canadian or American Thanksgiving Dinner, for example, is quite, quite tricky.