Personal Reflections on the Mass 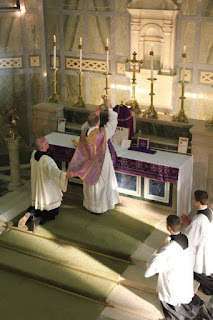 Good morning! It's Traddy Tuesday, the day on which I blog about some aspect of traditional Catholic worship and practice. This is important to me because I was once told the story of a Protestant would-be convert to Catholicism who went to her local parish church and was deeply disappointed by what she found there. She looked on the internet to find something closer to what she had been expecting and came upon my jesting run-through of the Extraordinary Form of the Mass. That was it! That was what she wanted! She found out where the nearest EF was and contacted a priest there.

The priest who told me said that I had converted the girl, and although I think he was exaggerating--she was already looking, after all--I am delighted to have helped.  As far as I know, I totally failed at winning souls for the Faith before I started blogging, so I was chuffed. There's a nice man who told me my blog converted him to the Faith, so that makes two. He also attends the Extraordinary Form of the Mass.

Naturally I attend the Extraordinary Form of the Mass every Sunday, even when abroad. If I really can't get to an FSSP (Fraternity of the Priests of Saint Peter) church or chapel or to the Oratorians' EF in Toronto for some reason, I find a Polish parish. In Toronto's St. Casimir's,  the atmosphere  is one of rapt devotion, and when I was there the church was packed to the doors. I imagine other "ethnic parishes" are like that; before I met the Extraordinary Form, I often took refuge at Toronto's St. Patrick's German.

From what was I taking refuge? Well, a better question is, What did I find at St. Patrick's German? Three aspects stand out: the attentive devotion of the (mostly elderly) immigrant Germans; the careful and deeply respectful prayers and rubrics of the German-Canadian priest, the grandson of German immigrants; and the difficulty of the language. For me it was not an everyday language. It was a language I had to work at to understand and so every word I understood was a precious jewel in itself. It was distant from me, and so--like a far-sighted person--I could fathom its meaning better.  Meanwhile, when a hip priest from Mittel Europa came to visit, he dazzled the simple congregation with his novelties--an elderly man enthused to me about it afterwards--and I understood barely a word of his homily, for which I am grateful. Homilies are not always edifying, and I don't count on a stranger for the Real Thing unless I go to an FSSP or Oratory Mass.

When I first went to the FSSP Mass in Edinburgh, I was startled by how different the Extraordinary Form was from the Ordinary Form. First, it was prefaced by the Asperges (or "sprinkling") rite, which is a purifying preparation for the Mass. Then instead of a processional hymn sung by the congregation, there was a Latin "Introit" sung by the choir. The priest sank to his knees at the foot of the sanctuary, as did the chief altar server, whom B.A. called the "MC." The priest began to pray, but I couldn't hear him. Between the end of the Introit and Kyrie--sung only by the choir--there was silence.

Silence! There is a lot of silence in the Extraordinary Form of the Mass. More than once I looked around at the rest of the congregation to see what they made of this silence. Were they fidgeting or whispering or what?

They were not. They were all looking towards the altar (on which the tabernacle resides) in deep, deep contemplation, with a reverence even more marked than that of the devout Germans in Toronto. "Hmph!" I thought with grudging respect.

It took me some time to get used to it all, of course. I juggled missal (with cartoon illustrations) and the propers (on the White Sheet or Whyte Sheete, as I dubbed it) and it took me an age, it seemed, to replace "Herr, ich bin nicht wuertig dass..." with "Domine, non sum dignus ut..." at the front of my memory. But I valued from the first the deep contemplative silence.

As the years go on, I find more and more to love in the Extraordinary Form of the Mass. Sometimes it takes me an age to get there--traffic jams right before the 6:15, ugh--but I never regret the journey. Yesterday there was a sung Mass for the Feast of All Souls', and poor B.A. looked vexedly at the time on his phone as the bus crawled through the rush hour mess on Princes Street. But we got there during an early verse of the Sequence ("Dies Irae") and the Mass felt all the more solemn and peaceful for Father's black-and-gold vestments and the northern dark pressing against the windows.

My head had been full of the Douthat Affair and second-guessing my decision to write the CWR piece. But when my eye fell upon the three young altar servers I imagined how horrible it would be if any of them were accepted to the same PhD program I had dropped out of. There are a lot of eager young Catholic students out there, whose heads could be turned by the stipend and the glamour. Forewarned is forearmed. So I stopped second-guessing and just prayed for the department and everyone who was totally cheesed off at me and asked forgiveness if anything in my writing of the article was displeasing to God.

Those were not prayers terrifically easy to pray, but the Mass made it possible. The silences especially. It does not surprise me that among our congregants are three very visually impaired people, one of whom is completely blind, because these silences are not empty. They are incredibly full; they are multidimensional. They are beautiful.

The Church has been well buffeted about this autumn, and we were hit with two more scandals yesterday: Scalfari (again) and a Vatileak (again). It's disturbing, of course, but I comfort myself that we have the Latin Mass. If anyone complains about Benedict XVI, I say, "Yes, but he gave us back the Latin Mass." If anyone complains about Pope Francis, I think, "Yes, but we have the Latin Mass." The Pope may change--popes rarely last a whole 30 years--and priests may change--leave, get married, die--and bishops may be discovered unfaithful, but by and large the Extraordinary Form of the Mass does not change. So I pin my earthly hopes for consolation to the mast of the Extraordinary Form of the Mass, and if it should ever be taken from Edinburgh, then--if B.A. agrees--we will follow it from Edinburgh.
Posted by Mrs McLean at 13:28