Today is Seraphic Singles Saturday, and given the heart-storms of yesterday, I think we should continue yesterday's conversation about feeling self-conscious about our looks.

I think the first thing to say is that we were all born with the face and bodies God gave us. We all got half our genes from our mother and half our genes from our father, and so we probably look a lot look either, or both, or like their parents, or like their grandparents, or like a combination of them all. When we are children, our adult relations and friends often amuse themselves by contemplating our appearance and offering opinions as to who we look like. Hopefully they ultimately admit that we're unique. The fact is that we are both: we are a genetic continuation of our ancestors and we are also unique. Even identical twins don't have the same fingerprints, for example.

"Grandpa will never be dead as long as we are alive," said I drily to my mother last summer as I contemplated our aging faces in the hall mirror. When I was twelve, it would never have occurred to me that I looked like my grandfather, save for the colour of my hair. However, as the years rolls on, I see him in my face, and ultimately I am pleased if not, you know, ecstatic. I enjoy thinking about my grandfather although we didn't have much time to get to know each other: he died when I was 4.

Looking like our family makes us aware that we belong to a family, and even if we are not that fond of our families, or never knew our birth family, it distracts us from concentrating too much on our own individual selves. We are not alone. We are not the only one who has this feature or that.  I have fuzzy hair, and kids made fun of me for that. But my American grandmother had fuzzy hair in 1910, and the neighbourhood children made fun of her, too.  Interestingly, in the 1970s and early 80s the taunt I got was "AF-ro! Af-ro!", whereas in 1909, my grandmother was called "N****'s Wool." Different words, same barely concealed contempt for black people and people who just look like them.

Dear me, why did I grow up so self-conscious about my hair? Let me think. Hmm.

Which brings me to the utter horror of the playground and the early discovery of children that there is no faster way to make another child angry than to say "You're ugly." If your elementary school was like mine, and I very much hope it wasn't, children remarked upon each other's physical appearance all the time and did a lot of comparison. R. (a boy) was shortest. J. (a girl) was tallest. E (girl) was fattest. N. (girl) was black. (N. was the only black girl in the school, and it wasn't until we were 13 that the principal came into the classroom to ask the boys to stop calling her a N****.) T. and K. (girls) "developed" early, which was not how the boys described it. H. was deemed ugliest, poor thing. She's married now, and she has big, beautiful brown eyes nobody in my class ever noticed behind her glasses.

Somehow--I'm not sure how--it was determined who in the class was pretty and who was handsome. Now when I look at our class photos, I see a lot of rather ordinary looking--and shockingly young--children. The coolest boy now just looks dopey. The boy I had a crush on has such a strong resemblance to sex-killer Paul Bernardo that my heart froze when I first saw the police drawing of the "Scarborough Rapist". The pretty little blonde--well, I guess she really was a pretty little blonde. And I was nowhere near as ugly as the boys told me, day in, day out.

Oh dear. All about me again. Well, the point I am trying to make is that we are influenced by the messages we are given over and over again, and if the children you went to school with didn't make you self-conscious about your looks, perhaps it was the expensive and lucrative efforts of Madison Avenue. If every girl and woman felt pleased by her appearance from birth until death, the $170 billion cosmetics industry would collapse, and believe me, it doesn't want that to happen.

And, therefore, sisters, we are presented with photographs EVERY DAY of what women "are supposed to look like" modelling make-up, nail polish, clothes, you name it. And the photos do not actually represent the reality of the models, some of whom are incredibly self-conscious about their long legs, long necks, bony arms, etc., etc. If we see those women often enough, we want to be those women or, thanks to the magic of mimetic desire, own their stuff.

Now it gets tricky. We assume that because we find those women incredibly beautiful, men must be throwing themselves at their feet. However, this is not necessarily the case. For one thing, many of them are teenagers, sometimes barely teenagers. Also, some of them are actually unusual-looking in real life and are/were horribly bullied by boys in school.  (Not ALL boys, I imagine. ) Their industries are fraught with control-freaks, playboys, cocaine and a lot of other things that do not add up to shy hand-holding on the third date, family-themed weddings and fifty years of wedded bliss.  Also, not to put too fine a point on this, some of them are as dumb as stumps. And why not? Lots of teenagers are dumb as stumps and people with quick intelligence tire rapidly of having to stand all day with their mouth hanging open just so: 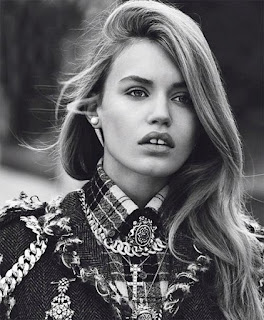 I hope Georgia grew up in the UK, not the USA, for at  a North American school she would have been teased mercilessly about that gap between her teeth. In fact, I know with utter conviction that if she had been in elementary school with me, she would have been called "Bunnicula." Oh, and the boys would have occasionally asked her if someone hit her chin with a chisel.

Once we are aware to the lengths to which power-crazed children and the cosmetics industry have gone to make ourselves feel absolutely terrible about ourselves, we can detach. The power-crazed children were LYING to us. The cosmetics industry is BRAINWASHING us. The proof that you don't have to look like Brooke-Shields-at-19 or Georgia-Jagger-Now to find love and keep is right there before your eyes at your married parents' breakfast table, on Facebook or at the mall.

Especially at the mall. Because we see with the eyes of love--indeed, because when we love our mothers we see them the way God sees them--we look at our mothers' wedding photos and think that they were incredibly beautiful. I think my mother must have been magazine-beautiful when she was 24, but I also think I might be biased. And on Facebook, we are fond of our friends, and so think they are pretty and attractive, and yet if they told us they were going to drop by the Ford Modelling Agency to see if they could get on its book, we would probably yelp "Oh NOOOOOOOOO!" The thought of our friend's beloved features being picked apart and judged by strangers would be just too horrible.  Meanwhile, there they go, dating and marrying and reproducing, without as much as a wink from a talent scout. A miracle?

No. An everyday occurrence. If you go to the mall or the High Street, you will see couples of all kinds hand in hand together. A typical young Edinburgh couple is a scrawny red-haired sunburned young man and an overweight girl with a ring through her nose and a stroller with a howling red-haired infant in it. Perhaps other strangers idly wonder what one saw in the other, but I never do. I assume that they started off as friends who got each other's sense of humour, shared a number of interests or prejudices, happily agreed that Hibernians was rubbish and Hearts pure dead brilliant (or vice versa), and then had a lot of fun in bed together or, if religious (doubtful), just made out a lot on the couch.

Men ultimately love who they love, and she is almost never a supermodel. Men who fixate on multiple women, who go on about the vast numbers of "beautiful women" in this country or that, and who seem to loathe the women around them or who merely share their nationality, are not ready to get married.  Not by a long stretch. They're just bigger versions of the boys in the playground shouting "Af-RO!" and "T. has big tits!"

Such men may never grow up, never make real friendships with women, never get married. And the loss is their own.


UPDATE on Pretty Girl Problems. When I told my mother that I wish I looked like Brooke Shields, she replied that if I looked like Brooke Shields, I would just have her problems. Unbeknownst to me until five minutes ago, one of Brooke's problems was that the aptly named Garry Gross took nude and sexy photographs of her when she was 10. At this was in the 1970s, and Brooke tried to get them banned in 1981, the courts decided they were not actually child pornography. Such a swinging time, the 1970s. So cooool.

UPDATE 2 (15:53 BST) Full Disclosure. The author of the above piece is going out for dinner and a film with some classmates, so she has put concealer under her eyes, foundation (SPF 15) all over her face and under her chin, darkened her eyebrows with powder, lined her eyes with white and grey pencil, put mascara on her short eyelashes and applied a "natural" (for her) coloured lipstick.

She is also wearing deodorant and perfume, and there is roughly a tablespoon of coconut oil in her hair.
Posted by Mrs McLean at 12:31