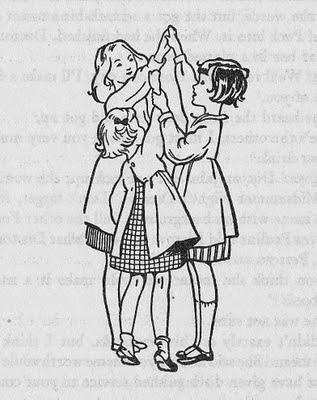 Today is Artistic Wednesday, and yesterday I had a play date with the Inner Child. As our play date last week at the Museum of Childhood and Blackwell's was so successful, I thought this week we would go to Edinburgh Central Library and have a look for the book I suddenly remembered during our last play date. This book is called Ballet Shoes by Noel Streatfeild.

I didn't realize how famous Ballet Shoes is when I began looking for it, but then I didn't remember what it was called or who it was by. I just remembered that it had three adopted sisters, one of whom became an actress and one of whom became a dancer. One was called Pauline and one was called, I thought, Petra. Happily, just remembering "Pauline" and "Petr--" and "ballet" was enough to find out the title on the internet.

The crucial thing I remembered was how very much I once loved this book. So after a long morning of housework and writing, I got on the bus to find it.

Julia Cameron of  The Artist's Way  says that one should write down items of clothing one wants and see if they magically appear,.Amusingly enough, one of my last thoughts leaving the house was that I really need a new pair of comfortable shoes, ideally navy blue loafers, and the moment I got off the bus, what did I see? A Scots shop selling shoes for ridiculously low prices, including navy blue loafers at £10.

I bought the loafers and walked to Edinburgh Central Library on the George IV Bridge. This library is almost beside The Elephant House, where J.K. Rowling wrote part of Harry Potter and the Philosopher's Stone. It is across from the National Library of Scotland, where B.A. and I go to do grown-up research. When I went into the wonderful Georgian building, I saw no  children's books, but I did see a sign saying "Language Learning."

"But I can't see the children's section."

"Well, ask someone. Ask the man at the desk."

So in a hushed voice I asked the man at the desk, and he gave me directions to the new children's wing. It had just opened, he said, which I thought was another fortuitous moment of Cameronian synchronicity. So the Inner Child and I went out into the grand foyer, and turned left and then made a right, and turned left  again and found ourselves in the children's wing. Happy screams pierced the air.

"They're louder than even me," observed the Inner Child.  "Oooh! Look a big circle cut into the wall big enough to sit in! It's padded! You're supposed to sit in it! I'd like to read there, for sure."

"Unfortunately, it's too small for your Outer Adult," I said, looking about. I was bewildered by the almost empty space. It was long on architectural cleverness, but short on books. I had to ask to find out where the "Ts" were, and then, when I made more detailed inquiries, was reminded that the author's name began with "S." Meanwhile, they didn't have Ballet Shoes at that location. The man offered to order in the copy from the one branch that had it in, but as one of the three toddlers in the joint screamed and toddled, I said I would have a look across the street at the National Library.

"That certainly did not work out as planned," I admitted, pausing in the enormous hall of the National Library. I wondered what we would do while we waited for the book to be fetched. Having a coffee while reading the papers wouldn't cut any ice with the Inner Child. "When we were the same age, was our children's section back home that noisy?"

"No," said the Inner Child positively. "There was a lady at the desk in front with glasses on a chain and she said Shhh a lot and parents were meaner and more embarrassed back then anyway. It was even bigger than that Children's Wing, and it had a LOT of books. And a fish tank in the wall. And in the second room there was a space down in the floor that you could sit in while a lady sat in front and read stories. It had millions and millions of books. It had Henry and the Purple Crayon and Harry the Dirty Dog and Choose Your Own Adventure novels. It was a totally awesome library. It sucks that they knocked it down. It was all 1960s-1970ish, but in a nice Canadian Owl magazine kind of way, with lots of windows and trees around and a windowed corridor, and it smelled good. Not good like food but good like library books. It had wall to wall orange carpets, and turnstyles that went KA-CHUNK. The new library back home sucks. Its children's section looks like Chernobyl."

"You haven't the slightest idea what Chernobyl looks like," I said, feeling very bored with the mature, practical character of the National Library. "Okay, let's go to Blackwell's."

"REALLY, OUTER ADULT?! REALLY?! WE CAN GO TO BLACKWELL'S!"

"Are you actually going to BUY the book? Ooooooh! What will B.A. say?"

"If I buy the book, I will buy it from the Canadian account."

"But B.A. says it's ultimately all the same money, and the Canadian account is not like this extra magic money you can pretend is just yours."

"Do you want the book or not?"

"Oh, I do I do I do! Can we take it back to George IV bridge and eat something yummy at Café Valerie? It's so romantic and fluffy."

"No, my feet hurt too much from these stupid high heeled boots. We can go to the hipster café."

"No way," yodeled the Inner Child. "Too many beards. And beside that's where you do Poh-lish."

She ran ahead and did a weird wiggling walk that I presume was an imitation of my own noble tread.

"Ooooh look at ME, I am so hip, I write in Poh-lish. I am an in-tell-ECK-choo-al! I may be over forty but I am totally down with the hipster kids. I can swing dance, and I even have the glasses on today,  Na-PRRRRRRR-AHV-da?"

"Stop that. Okay, we won't go to the hipster café. We can get something at Blackwell's."

So we went to Blackwell's, and the Inner Child made a bee-line for the children's section which, although much smaller than the Central Library's new children's wing, was much better stocked. The Inner Child bounced around so much looking at things that in the end I had to ask a sales clerk for help. She found Ballet Shoes right away.

"YAY," shouted the Inner Child, only this time in a way this other adult could hear. She smiled and went back to her counter

And in the end I had a café au lait and the Inner Child had a gingerbread man, and we sat together in a red leather armchair in a corner of the bookstore café and read all about Paulina, Petrova, Posy, Garnian, Nana and Gum.

Which children's books did you like best?
Posted by Mrs McLean at 12:07