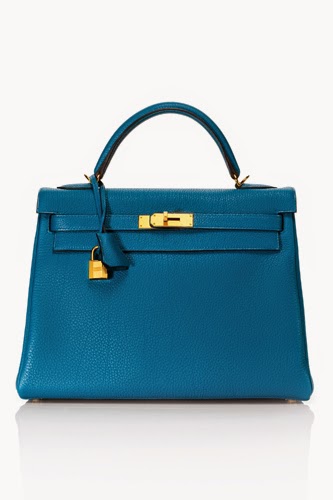 Yes, I am including a Hermés Kelly bag in my list of beautiful things. My mother will clutch her throat. I am sure she would tell me that there is no way any handbag is worth $16, 500, and that I would be merely paying for the label. She might even add, "And where would you wear it?" for good measure.

I would most definitely wear it to church. And on holiday to Italy.  And on mini-break to London. And home to Toronto. And anywhere I would bother to wear eyeliner and foundation. So not Tesco or to the former Historical Killing House* where I take the Historical House recycling.  I am sure I would be invited to the New Club more often if I had such a bag, for then my host would be seen, not with a mere woman, but with a woman with a cobalt blue Kelly bag.

My mother is now rolling her eyes, so I will try to defend the longing to own a Kelly bag on grounds superior to mere snobbery and unfulfilled desire to be asked to the New Club. I will point out that although nowhere can you see an explicit Hermés label (the H on the lock is the gentlest hint), any handbag afficionada would recognize this handbag at once. The design, the leather, the hardware, the stitching--all top-notch. Each bag is made by one artisan who has years of training. The Kelly bag is a wearable piece of art. Yes, celebrities buy them. Yes, they are hard to get. Yes, they are Girardian objects of mimetic desire. But they are also beautiful examples of the craftswoman's (or craftsman's) art. I mean, look at them!

My eye was caught the other day by a magazine headline asking if I was a "shoe woman" or a "bag woman", and although naturally my highly trained intellect was outraged by the reduction of womankind to "shoe women" and "bag women", I knew exactly what was meant. I busily examined my psyche and concluded that I was a "bag woman." For one thing, bags last longer.

I have a theory that the reason why women love shoes, other than that we are told that it is feminine and attractive to love shoes, is their symbolic value. A pair of pretty shoes, especially if they have impractical heels, suggests that your necessities of life are assured. If you can afford to drop $100 (or 65 quid) on a pair of pretty shoes, then this means that there is a roof over your head, a coat on your back and breakfast in your belly.

One of the sacrifices I make for Polish is shoes, alas. (A term of Polish night school costs as much as two beautiful pairs of Irregular Choice pumps.) Fortunately, though, in the days before I fell in love with Polish, I bought some  pretty shoes, and I keep them very carefully, storing them in their original boxes and never wearing them outdoors. Outdoors is for my flame-orange Hunter wellington boots, which I got on sale, flame-orange apparently having gone out of style.

I am not tempted to look higher than Irregular Choice, for I object to spending more than $100 (or 65 quid) on shoes, no matter how beautiful they are. It's not just that freelance writers do not actually have the price of a pair of Manolo Blahniks in our wallets. It's that shoes wear out if you are so foolish as to wear them out of doors.

But I must say that I am tempted by BAGS. Currently I am running around town with a canvas tote bag big enough to carry my medium-sized Polish dictionary. I bought it for six quid at a charity shop, and it is a far cry from my dream bag. It is not at all an example of the craftswoman's art, and the lining is all ripped, and as long as I am seen with it, nobody will ever invite me to the New Club, weep weep.  Amusingly, or touchingly, if you are touched by middle-aged love, I did buy B.A. a proper tweed-and-leather messenger bag from Walker Slater.

Are shoes and bags goblin fruit? I think not. I believe it is possible to collect nice shoes and bags without becoming a wan-faced addict. I would suggest, however, that the true shoe or bag collector is not the woman who buys any old shoe or any old bag any (or every) weekend, but the woman who is willing to go without many shoes or many bags to save up for the shoes or bag of great quality and price.

That said, unless we win the lottery, I do not think you will see me with the above bag anytime soon.

*The Historical House, like most genteel houses of its era, had a home farm and raised its own pigs. They were killed roughly where the recycling now goes. I lead a very interesting life.