My Latest Visit to Poland Part 3 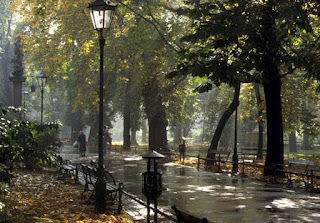 "Kraków is the new Paris," I thought on Tuesday, as I went for a stroll under the trees ringing the Old Town. Of course, that may have been a hackneyed and shallow thought, for Kraków is certainly as old as Paris and I have been to Paris only once. But when North Americans like me think about Paris, we are rarely thinking about contemporary, "multicultural" Paris, but of old-fashioned French Paris in the 1950s. Or the 1920s. That Paris no longer exists.

Kraków, however, still retains the social cohesion of an earlier age, and the thick green ribbon of park around the Old Town teems with young Polish university students, Polish businessmen and women, Poles on bicycles, Polish grannies leading small Polish children by the hand. Bells ring from towers, and Poles pop in and out of churches.  Polish flower women--their trade passed from mother to daughter through the ages--sell bouquets in the Main Market. There are Polish bakeries and Polish cake shops and cut-price Polish book stores and ratty Polish liquor stores, and the only jarring, Disney-esque note is the golf carts trolling for tourists with Auschwitz/Wielicza written on their sunshades. (Okay, arguably the horse-drawn carriages are fake and Disney-esque, too.)  As I have always lived in multicultural, multiracial cities, I find this 1919 idea of ethnicity/language = nationality romantic and exotic. But of course such ethnic homogeneity is not exactly normal here: there's a gaping conceptual hole in Kraków where tens of thousands of Jews used to be.

I try not to think about that, though. I have always avoided the tourist-heavy reminders of the Shoah--except Auschwitz, which is not in Kraków but 40 kilometres west, beside Oświęcim. I went there last year in a spirit of pilgrimage after visiting Saint Edith Stein's home in Wrocław. When I am in Kraków, I try not to think about the Second World War--or anything sad--at all.

But to return to my travelogue--which my mother is enjoying--on Tuesday I went for an early morning walk from Podgórze to the Old Town to see the early morning sun on the nearly empty Główny Rynek (main square) and to have a coffee and croissant at Pierre. Pierre was playing a particularly noxious CD of French pop--including a bilingual version of Bonnie Tyler's "Total Eclipse of the Heart"--so I soon went out for my circumnavigation of the park-ring, or Planty. Here I thought my "Old Paris" thoughts and missed my husband, for although B.A. would not have enjoyed some of my other adventures, he most definitely appreciates the beauty of the Planty and its views. It really did not seem fair that I got to be there and he didn't.

Then I went back to my publishers' office to arrange a meeting with some friends before going straight back by tram to the Old Town to buy gifts (chocolates from Kraków Kredens on ulica  Grodzka) and have lunch.  Oh, and I went into the Church of Saints Peter and Paul to pray and so as to reassure Benedict Ambrose that I had gone into another of Kraków's churches.  B.A., who is all about art galleries when he is in Edinburgh, is ALL about the churches abroad.

I had lunch at Polskie Smaki at ulica Tomasza, 5, which also reminded me of B.A., for on our one visit to Kraków together, we frugally ate there every day. I ordered żurek (a soup), pierogi with minced duck and fizzy water, which I was very glad of as the pierogi arrived swimming in rich bacon fat. The waitress unsmilingly corrected one of my adjective declensions, which I have trained myself to appreciate, and nobody goes to Kraków to be flattered by servers. If you want flattery, get lost in Wrocław and rescued by a little old man who calls you darling. 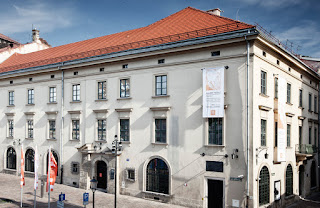 After lunch (which cost 24 zł, i.e. £4.80, $9.60), I rolled out the door and made my way to the Szołayski House on Plac Szczepański. Now the light of fanaticism appears in my eyes, for the Kamienica Szołayskich is where the big collection of Polish Art Nouveau usually is, and I am an Art Nouveau junkie, especially when the Art Nouveau is of the Młoda Polska ("Young Poland") school. Thus, the Kamienica Szołayskich is my favourite building in Kraków, which is saying a lot.

The English language guidebooks, being a tad out of date, call the house the Wyspiański Museum, and the girl in the shop has to tell an endless stream of English-speaking tourists that the Wyspiański collection has been off the walls for five years and there are only four pieces on display. Currently the Kamienica Szołayskich has two exhibits: on the top floor Feliks Jasieński's Młoda Polska and Japanese collections, and on the middle floor his French collection. Naturally I hot-footed it to the top floor.

There I repeated my language exercises of the National
Gallery: reading the informative placards one paragraph at a time, alternating between Polish and English, before looking at the glorious paintings. Strangely, what struck me even more than the paintings was Jasieński's personality mediated through the quotes from his writing on the wall. There was a really beautiful (if sad) one describing the city after the 100th performance of Wesele.

I think the best way to look at art in Poland is chronologically. First you look politely at the boring 18th century portraits common to the Austro-Hungarian and Prussian empires. Then you look at the 19th century landscapes, historical scenes and mythical figures to perk you up. You save the best for last, which is everything painted, carved, printed or turned into stained glass windows between 1880 and 1919.

Alas, I came to the end of the collection and went downstairs. But to my great interest, there was a free exhibit of funny little items owned by the late Polish poet Wysława Szymborska. I am of two minds about Szymborska because she was a frightful Commie; a Polish student from Warsaw poisoned my mind against her years ago. But on the other hand she was a splendid poet: funny, imaginative, brilliant.

I confess that I am a little annoyed at that Polish student from Warsaw for telling me about Szymborska's Stalinist action of shame. But truth is what is, and many of us do things in our youth that we are sorry about later. Oh bother. It was very bad. But her poems are delightful, and it was fun to see her collection of oddments, from her postcard collection to her Noble Prize certificate.

I picked up some last-minute items from the Galeria Krakowska (i.e. the mall) nearby and then took the tram back to the publishing office, where I exchanged presents with my friend Gosia and had conversation, cake and coffee. Then I said good-bye to Gosia and Father Paweł and went downstairs to say good-bye to the porter, who made a bit of a fuss and summoned Father Paweł by phone ("Is she rich?"), and the upshot was my red-faced dash to the bank machine to pay for my stay, followed by a heart-thumping ride on the tram to the train station, as I prayed I would not miss my flight.

Heigh-ho. In my Catholic Bohemian world friends constantly stay with friends abroad for free, so.... But at any rate, it was a very reasonable price, and when I tried to give the porter double, he waved it away in a high good humour, and so we parted on good terms.

Laggard's luck was still on my side: I caught the airport train on time. And as it was, my flight was half an hour late, which gave me lots of time to ponder bottles of vodka in the duty free before buying one (30 zł, i.e. £6, $12) and to put my feet up in a plastic chaise lounge at the gate and write.  I re-opened my diary as soon as I got on the plane (aisle seat--yay!), and I did not stop writing until we landed. So that was splendid, too.
Posted by Mrs McLean at 09:55