Food for the Synod-Stricken Soul 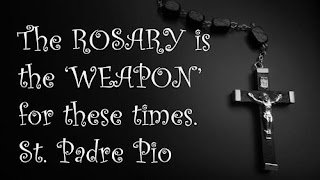 I confine my remarks here to the laity and rank-and-file priests.My advice to bishops would be rather different.

The trads all knew October was going to be tough, so we were prepared. Some brought popcorn. Some howl with laughter as a bishop comes up with another clunker along the lines of "Let's use the Power of the Keys to twist God's arm behind His back!"* The spectacle of... But let's not go there.

If you are a layperson, and you do not feel it is your job to rebuke bishops or comfort the faithful with rude jokes, stop reading anything having to do with the Synod. When you are tempted to do so, pick up your rosary and say a decade for the Church instead. Yes,the Synod is a disaster--in a way. (Now we have a rough idea of which bishops believe and love the Faith and which ones don't, and we can tune our ears accordingly.) No, this is not the end of the Church.

If the Church should one day be reduced to a tiny village in rural Portugal, with one priest, one seminarian, five nuns and three families, that would still be the Church. But, you know,  Napoleon's men thought Pius VI would be the last pope and they were wrong. The Church looked in terrible shape in 1801, but then in the 19th century--what a flowering! My  "History of the Church in the Nineteenth Century " was full of wonderful saints and stories. My priest-professor told us the tale of Father Petitjean and the Nagasaki Christians, and he began to weep, he was so moved.

I have been having trouble sleeping, but I have discovered a cure. Every evening Benedict Ambrose and I watch an episode of the Agatha Christie's Poirot series starring David Suchet. I have read a little about Suchet's preparations to play Hercules Poirot, and he amassed a huge binder of details. Even more than Agatha Christie herself, Suchet decided that Poirot's sense of justice stemmed not only from his career as a policeman in Belgium, but from late 19th century and early 20th century Belgian Catholicism. Poirot may love the straight lines and simplicity of Art Deco, but he is not a modernist. Indeed, he is even a bit of a Romantic, a Catholic Romantic who must have had a very good classical Catholic education: balanced.

Modern Belgium is a moral mess, but when Poirot is on television, old Catholic Belgium returns for an hour or so. There is our Monsieur Poirot, an agent of justice. No matter how pretty the murderess, no matter how rich, no matter how charmingly she pleads, Poirot turns from her with a curt "I do not approve of murder, madame."

Accidental manslaughter--well. He does not sit in judgement over the merely unlucky; Poirot is merciful to those whose hearts are pure of murderous intent, as I noted at the end of last night's episode. All the same, he does not twist with the wind.

Another fictional hero from whom I have derived comfort is Giovannino Guareschi's Don Camillo. Last night I read Comrade Don Camillo, and tears sprang to my eyes several time. Guareschi is one of those very few authors who can make me cry; Sienkiewicz is another one. Of the volumes of the Don Camillo stories, I've read, I think Comrade Don Camillo is the best. (N.B. Don't bother with the clowning of Fernandel in the films. Stick with the books.)

Not every reader is a fan of Don Camillo's peasant ways, his scheming against the local Commie mayor (who is the closest thing he has to a best friend), his mighty fists. However, what Guareschi makes clear again and again is how decent most of these post-war (but pre-1963) Italians are, be they Catholic or Communist, they seem to him decent---even heroic--often heroic--men and women, loved by God and deserving of our love, too. For these are merely economic Communists; the hell of the Frankfurt School has not entered their hearts.

In 1963, Guareschi was a sad man, shocked and disappointed by the "Dolce Vita" attitude sweeping over Italy, threatening the little worlds of the Don Camillos. However, to open a volume of his stories is to get one of them back for a little while.

*Members spent quite a bit of time talking about the beauty and comprehensiveness of No. 84 of Familiaris Consortio. Some suggested that FC 84 ought to be put directly into the text. One father spoke about the power of the keys and the Holy Father’s ability to change things. He said that the Pope can, in effect, twist the hands of God. Others responded that the power of the keys does not give the Church the ability to change Revelation and the faith of the Church."