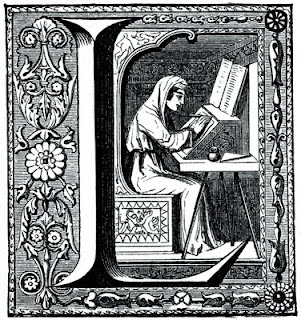 Good morning, my little ones. I scrubbed yesterday's post because I wrote it when I was sad, and decided later it was TMI. Meanwhile, I am tired of writing about myself, so I will get right down to the business of the day, the day being Traddy Tuesday!

Yes, it is Traddy Tuesday on Edinburgh Housewife, the day I write something about the traditional devotions and practises of the Church, like not giving the Blessed Sacrament of the Eucharist to people who are living in sin. Fortunately I don't have to write about that, as the Polish Bishops Conference has just made an excellent presentation on the topic.

I have come across arguments by--surprise--Americans that English should be made the new Language of the Church. As it happens, the unofficial Language of the Church is Italian, and this is now the default second language of the international clergy in Rome. Personally, I like Italian, but this development would have been a surprise to Saint John XXIII, who, at the time of my writing this piece, was still just a Blessed. Here is the 13th of my Mad Trad Corner pieces, which first appeared in the Prairie Messenger in February 2011


Latin the Language of the Church

Perhaps the most beloved of those who have defended Latin as the universal language of the Roman Catholic Church is Blessed John XXIII. In 1962, on the eve of the Second Vatican Council, Pope John promulgated an apostolic constitution named “Veterum Sapientia”. It is concerned with the study and promotion of Latin, which had fallen into some neglect.
Pope John echoes the tribute of the Early Church Fathers to the wisdom of the ancient pagan Mediterranean world in which Christianity first appeared. “The inauguration of Christianity did not mean the obliteration of man’s past achievements,” he writes. “Nothing was lost that was in any way true, right, noble and beautiful.” Although the Church prized other ancient languages (including those still used by Eastern churches today), it gave a primary place to Latin, the language which “proved so admirable a means for the spreading of Christianity throughout the West.”
For nineteen hundred years, Latin—which after a point did not change as other languages changed—was the common language of educated people in the West. However, as Pope John observes, “it does not favour any one nation.” He quotes his predecessor Pius XI, who wrote “for the Church, precisely because it embraces all nations and is destined to endure until the end of time…of its very nature requires a language which is universal, immutable and non-vernacular.”
Pope John goes on to list the other advantages of Latin and to lay down a number of instructions for the promotion of the study of Latin, most of which were ignored and even forgotten in the excitement of the Second Vatican Council. What is evident is that Blessed John XXIII neither expected nor sought the virtual eradication of Latin from Catholic life. It would have surprised him very much to know that the official language of instruction in Rome today is Italian, and that American, African and Asian priests sweat under the Roman sun over Italian textbooks. It certainly surprised me to discover that the official language of the Asian Bishops Conference, surely a body well steeped in post-colonial discourse, is English.
Moreover, it would have staggered John XXIII to know that Latin would be almost entirely dropped from the Latin Rite, replaced rather than supplemented by vernacular languages, and that those who loved the ancient Latin liturgy would have to fight so hard to keep it. The constitution Sacrosanctum Consilium, promulgated by John’s successor Paul VI, called for some use of the vernacular, not a radical rejection of 1800 years of Latin.
Some jokester has observed that we once taught Latin in Canadian schools, and now we teach remedial English in Canadian colleges. Forty-five years after the revolutions of the 1960s, it is easy to forget that Latin was once a core part of the Canadian curriculum, just as it was in the American and the British.
“When did you start Latin?”I asked my Canadian mother.
“Thirteen,” she replied.
“When did you start Latin?” I asked my American father.
“Fourteen,” he replied.
I started tentatively at twelve, tutored by my father. To this day I can remember my first Latin sentence, which was Dorothea nautam amat, Dorothy loves the sailor. The mind of a twelve year old sucks up information and hangs on to it forever. In old age, no matter what else I forget, I will remember Dorothea nautam amat. My father learned the server’s responses to the traditional Latin Mass when he was fourteen; the trick to languages is to begin them young.
The Western Church shifted to liturgical Latin when she was young and borrowed heavily from the Greek of her infancy to express uniquely Christian concepts. Educated Roman pagans sneered, and Saint Augustine, a master of classical Latin, defended the Christian innovations. Over the next two thousand years, the Church developed a rich treasure of Latin prayers, hymns, and texts, much of which has not yet been translated into English or any other vernacular language.
It may seem madness to love and prize a language which most Canadian schools have not taught for the past forty-five years. However, few Canadian schools teach Hebrew, Arabic, Church Slavonic or Greek, and yet our Jewish, Muslim and Orthodox Christian brethren prize their traditional languages. At a bat mizvah I attended, the traditional Hebrew recitation from the Torah was acknowledged with a volley of candies. The candies represented the sweetness of learning.


I think it is safe to say that Jews, Muslims and Orthodox Christians derive no little amount of their identity—and indeed, a sense of unity—from their ancient languages. They do not condemn them as elitist or argue that their children are too stupid to learn them. And at a time when Catholics are more likely to praise other traditions than to cherish our own, the importance of Latin to Catholic identity is even more apparent than it was in the days of Blessed John XXIII.

****
I sent off this column just before I went to give a lecture to the St. Edith Stein conference at the University of Notre Dame in Indiana, and the end was very, very near for "Mad Trad Corner".