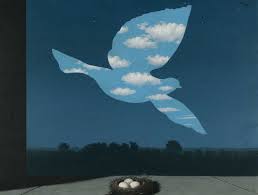 I will be meeting some vacationing relations for a weekend in Belgium, near Lieges.

Now I am pondering all that I know about Belgium:

1. It used to be super-Catholic.
2. Hercules Poirot is a fictional Belgian.
3. Magritte was a real Belgian.
4. Hergé, who invented Tintin, was also a real Belgian.
5. It got very banged around in the First World War.
6. It got banged around again in the Second World War.
7. Some of Belgium speaks French, and some speaks Dutch.
8. You can have your sick children put down like dogs there.
9. Lieges is dangerous after dark.