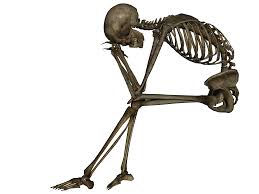 Ah, death. Death, death, death. It's Traddy Tuesday, the day of the week earmarked for chatting about all things Catholic that fell out of fashion between the death of Saint John XXIII and the election of Saint John Paul II. Not all traddies are happy with the papal record of Saint John Paul II (Ale skąd!), but at least he put Our Lady right back into the conversation. Totus Tuus meant that JP2 belonged heart and soul to the Queen of Heaven; whatever must our Separated Brethren have thought?! Screech!

The amusing thing is that from conversations with Calvinist Cath, I have gleaned that the most anti-us of our SB have only the foggiest clue what happened at the Second Vatican Council. It was certainly news to Cath, who is very well educated, that the Council Fathers decided that Error has Rights after all and that Rome has lost all interest in wiping the Free Presbyterian Kirk from the face of Scotland. Indeed, Rome would probably be fascinated that the Wee Frees still refuse to work, or make anyone else work, on Sunday, a practise that always impresses me. The women still cover their heads in church, and they don't wear make-up. If I had been born a benighted Proddie, I'd like to have been a Wee Free: they are delightfully consistent and they think Ian Paisley a disgusting heretic.

But back to death. Death is something everyone should think about all the time although not in a morbid way. We should think about it quite sensibly--making wills and destroying the evidence and confessing our sins and doing good deeds, for as I learned from a mediaeval morality play when I was seven or so, only our Good Deeds come with us past the grave.

It is also kind to think about our family and neighbours who have gone before and to chat with them occasionally, to help them through the privations of Purgatory, whatever they may be. As I have always feared il Purgatorio will be just like waiting for the 1 AM bus in Sheppard Station in Toronto in winter, I suspect loneliness might feature.

My Canadian grandmother, Presbyterian though she was, used to visit her dead husband in the graveyard and chat quite naturally to him. I wonder if my mother ever thought to ask her where she thought he actually was. Grandma must have thought he was somewhere, but where? I wonder if she had picked up Catholicism by osmosis; as she surrounded by Catholic descendants, I can easily imagine the water of life flowing out of us into her like a dried up cell among juicy cells or a dried up potato in the sink. But I digress.

The first time I  heard a traddy homily, it was by Father Robinson of the Oratory of Saint Phillip Neri. This was on All Saints' Day or All Souls' Day some time in the 1990s. It must have been at Saint Vincent de Paul on Roncesvalles Avenue. Anyway, Father Robinson gave a peppery sermon on the difference between "POP-ular Catholicism" and "REAL Catholicism", and tough talk about death was key. He thought it was foolishly sentimental to assume that our dead go straight to heaven. He may or may not have mentioned that it was dangerous for us to assume WE will go straight to heaven, no matter what we do. At no point did he mention that we are an Easter People and Hallelujah is our song. This is just as well, as the neighbourhood was still populated with people who had suffered under both Hitler and Stalin and knew that Hallelujah is not our only song. "Oh my God, have mercy on us! Show us Your face! Have mercy on us!" is also a keeper.

Without further ado, here is "Dancing Towards Death", which first appeared like a cuckoo in the nest of dear old Prairie Messenger. And I am guessing the PM's Father Britz (RIP) was pissed.

Some Catholics loathe Halloween. I know a priest who organizes an alternative Halloween party, asking children to dress as saints instead of gory characters. As the goriest Halloween costume I ever saw was John the Baptist with his head on a plate, I have to wonder if Father isn’t perhaps erring in the saccharine direction.
I love Halloween because it provides our entire society the opportunity to cheerfully ponder death. Many saints have counselled us “momento mori,” to remember that we will die, and to meditate upon this every day. And just as every Halloween demon can remind us of the ugliness of sin, every Halloween skeleton should remind us of the inevitability of death.
We are usually screened from death; most of the time it takes place in a hospital, not at home. The dusty black box in my parents’ basement, containing a purple stole and bottles for holy water and consecrated oil, was a standard feature in 19th century Catholic homes in case a sudden crisis necessitated a visit from a priest and the last rites. But although I have seen any number of fictional deaths on television, I have never kept a loved one company as he breathed his very last. Certainly I am grateful for the advances in palliative care that almost always mean a hospital death, but I wonder what it means to die between visiting hours, surrounded only by machines and strangers. No wonder we continue to ask so fervently that Our Lady will pray for us at the hour of our death.
In unhappier times, death seemed omnipresent. The great plagues that devastated Europe in the 14th century inspired novel meditations on it. There is the danse macabre in which dancing skeletons lead men and women representing every class to the grave. There are gravestones depicting skulls. There is the pastoral manual “Ars Moriendi” (The Art of Dying) of 1415. And there is the surprisingly spritely tune that accompanies the song to which mediaeval pilgrims danced during vigils at the church of Our Lady of Montserrat, “Ad Mortem Festinamus” (“We are hurrying towards death”):
Life is short and shortly it will end.
Death comes quickly and respects no-one.
Death destroys all and pities no-one.
We are hurrying towards death; let’s stop sinning.
Unless you shape up and become like a child
And change your life by good deeds,
You will not enter, blessed, into the Kingdom of God.
When the trumpet sounds, it will be the last day;
the Judge will call the saved to heaven, the damned to hell…
We are hurrying towards death; let’s stop sinning!

The song encourages hearers to give up worldly vanity, confess our sins and make friends of our neighbours. With egalitarian glee, it observes that even kings and clerics are doomed if they do not become as humble as children.
Ad Mortem Festinamus, which strangely became a club hit in 1992, strikes me as a folk version of the Dies Irae (“Day of Wrath”). The Dies Irae, which was sung at Requiem Masses for hundreds of years, depicts Judgment Day so dramatically that it inspired some of the greatest music ever written and was discarded as unpastoral in 1970.


But we must not think only of our own deaths. It has always been the practise of the Church to pray for those who have died before us. Although some recast funeral services as “celebrations of life,” Catholics concern themselves with the present circumstances of the deceased. Although we would like to think so, not all of our aunts are sainted. And this means prayers.
Posted by Mrs McLean at 13:56